Nothing Leads to My Best Something!

In Disney’s Christopher Robin, Robin, the main character, finds himself pulled between his family and his job. His boss scolds him, telling him “Nothing leads to nothing,” in essence saying, “get out there and do something if you want anything in life.” In the continued verbiage of Robin’s employer, Robin can either “sink or swim.” The inimitable Winnie the Pooh, confidant and friend to Robin, later counters, “Nothing leads to my best something!”

These last six weeks have been filled with a lot of ‘nothing’ for Kristi and I after the skateboarding accident I sustained on August 10th. Of course that is not entirely true, I have been faithful to my physical therapy twice a day and the daily tasks of life take more time during this recovery period. But there have been large swathes of time to do ‘nothing’, to just “be.” I have spent hours in the sun-porch just looking out into the green space behind the home of Jim and Sherri Bertolet, my parents in-law. We have been able to listen to baseball in the evenings, watch US Open tennis, watch movies, read books we have been chomping at the bit to read, spend time just chatting with neighbors, and take walks in the evenings as my hip slowly heals. I have been able to slow down to a pace where I don’t have to always be concerned about what to do and where to be next. Of course I have not been totally freed from my spirit of “do-ism” and planning, nevertheless, I feel more able to relax and "free" as a result of this forced rest. 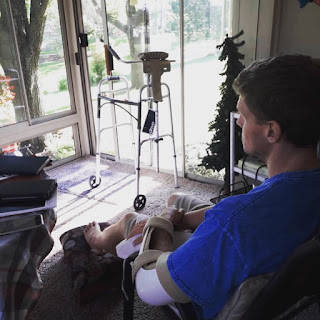 On sun-porch, resting and enjoying peace 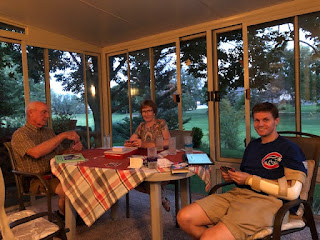 Friends from church bring us a meal to share

For someone like me who too often feels driven to action, I feel like I am “seeing the light” afresh, that indeed, “Nothing leads to my best something.” I am being confronted once more with the wisdom and truth that the notion of ‘nothing leading to nothing’ is a lie. Christopher Robin found himself sinking into the abyss of pandering to his employer at all costs, not honoring his True Self and not honoring his family and his own past which included the bear Pooh. His wake-up call began by finding Pooh on a bench near his flat in London, a meeting which would change everything.

For me, my accident was also a wake-up call. It was a reminder of my human frailty and, as a result of a broken hip and a broken elbow, a reminder of my dependency upon others around me, in this case for simple everyday tasks as simple as getting out of bed.  Kristi and I have experienced a fresh appreciation for the gift of life and the simple pleasures of being able to move, walk, travel, and enjoy the outdoors. We trust that these weeks of ‘nothing’ and forced rest will indeed ‘lead to our best something’. We do not know what that ‘best something’ is, but we trust that God has done something in us these six weeks which will prove profitable for His Kingdom here on earth. 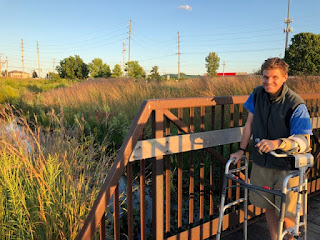 Enjoying a short walk and enjoying the sunset 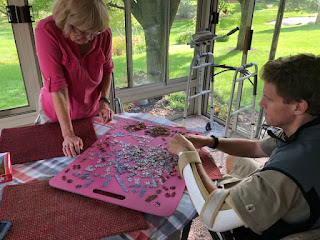 Putting together a puzzle

Thank you for those of you have prayed for us and encouraged us during this season. We appreciate the phone calls, the home visits, the meals, the cards in the mail, the emails, the puzzles, the movie recommendations, the Facebook posts, and the gifts sent. The words of the letter of the author to the Hebrews reminds us that we are surrounded by a great cloud of witnesses as we run with perseverance the race marked out for us in Christ Jesus (Hebrews 12: 1).

Indeed, as Winnie the Pooh reminds us, our “Nothing leads to our best something!”
Posted by Bob Rice at 12:04 AM