Healing from Trauma in Eastern Congo 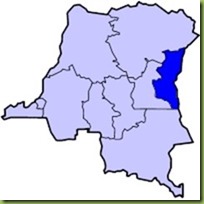 The Eastern part of Congo is a volatile and dangerous place. Dozens of militia groups vie for control of mines or areas rich in natural resources, plundering, raping, and decimating villages to exert control. This has gone on for near 20 years, resulting in more than 60 camps for internally displaced persons (IDPs)– those who flee their villages when they are repeatedly attacked. Today more than 1 million people live in IDP camps in the the two provinces of North and South Kivu in the Eastern part of Congo (the dark blue area in the map to the right). Even in the camps, life is dangerous – women are often raped when they try to go fetch water, men have to walk long, dangerous distances trying to find work, there is no place to farm, and children are often not able to go to school. This part of Congo is the part that makes the news – a very different environment than the relative security and peace that we have experienced in Kasai.

Last August, in this midst of this chaos and trauma in Eastern Congo, several churches came together to learn how to find healing from the trauma they have experienced, and specifically how to help children who have lived through traumatic experiences to find healing. The Trauma Healing Institute, formed through the cooperation and support of several Christian organizations, developed a Biblically based curriculum. Participants look to the Bible and share together why, if God loves us, suffering still exists, and how we can find healing and freedom from suffering that has affected us. Through the power and sacrifice of Jesus’ death on the cross, we can find forgiveness, and also the power to forgive those who have hurt us. We were able to attend this same training in October in the United States.  The training conducted in Eastern Congo has a particular focus on ministering to children by creating what they are calling Healing Heart Clubs. 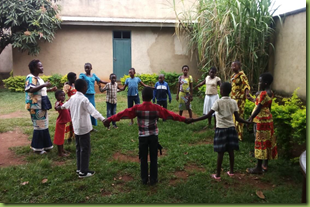 The adults trained in August in Eastern Congo were each commissioned to minister to groups of children – in schools, in IDP camps, and in churches. Some of the children had seen their parents brutally killed, some had been sexually assaulted, and others had been separated from their families in the fighting. In these groups, they finally felt they had a safe space to open up, share what they had experienced, and be honest with God about their grief and anger. 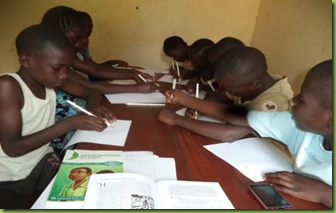 Dylpai is an 11-year old boy who comes from the city of Beni. That region has experienced many attacks, and he has seen people hacked with machetes, including his uncle. Dylpai began having nightmares and was struggling in school as a result of the trauma he had experienced. When he joined the Healing Hearts club, he was very quiet and closed at first. After a few days, when they got to the lesson about forgiving people, he was able to open up, share his fears, his experience, and also welcome Jesus as a friend and express the desire to forgive the men who had committed atrocities in his environment.

We are hopeful that a follow-up training can be held this summer, which would further equip those who have been trained and qualify them to be ‘master trainers’. Once they have been qualified, they would be able to go and train others, which would spread this important resource to more children throughout Congo who have experienced trauma. We are hopeful that it might even spread to Kasai! We are praying that people eager to support this effort would step up to given financial and prayer support for this follow-up training. If you would like more information, please contact us – either through e-mail or a comment on this page. You can also read more testimonies and progress on this initiative in the newsletter of our colleague, Christi Boyd. And if you want to contribute financially to this program, you can do so through the account for the work of the ECC (Protestant Church Council in Congo), with the designation “Healing Hearts”.

The day after Thanksgiving we received a text message that changed the trajectory of our current life situation and altered the plans made and later confirmed when we left Congo in early 2016.  A few days after receiving the fateful text message, a Skype call confirmed this reality.  We are not returning to Congo this month as planned.  In short, due to the continued political trials faced by the people of the Democratic Republic of Congo, coupled with an ongoing church conflict which has lasted four years and longer, our mission leaders have been advised by our partner church, the Congolese Presbyterian Community, that Kristi and I and another colleague should not return to Congo until a more favorable time.  When that “favorable time” pokes its head from the clouds of the current political and ecclesiastical impasse remains anyone’s guess.  It could be two months, it could be twelve.  It could be indefinite.

So what does one do under such circumstances?  Well the answer is obvious, go to Disney World!  Kristi and a friend will travel to Orlando at the end of the month to celebrate a landmark birthday which they share.  One also takes time to celebrate “hygge” (hoo-guh), a Danish term defined as “a quality of coziness and comfortable conviviality that engenders a feeling of contentment or well-being.”  This term made the short list of finalists in 2016 for “word of the year” by the Oxford Dictionary (see New Yorker article).  We plan to practice “’hygge’ today, making a fire in the hearth and reading books of inspiration while sipping wonderful teas like Breakfast in Paris and Blueberry Hibiscus.  One also chooses to leave the bitter cold and wind, the snow and frozen ice of Central Illinois for Southern California, where we will spend the month of February and some of March.  One also enjoys winter sports, as Bob plans to ski or snowshoe with friends in the Sierras or Pacific Northwest.  Of course, our time of being and waiting will include more than fun activity.  We will find a few work projects, read books that have long been waiting in the wings, do research on church and culture in Africa, and find creative and therapeutic outlets which bring healing and nourishment to our souls.

So, why does God allow periods like this one to surprise attack us?  Well, for one, it feels to us like a “holy disruption.”  For months now, the scripture passage from Isaiah has come to mind -

Forget the former things; do not dwell on the past.
See, I am doing a new thing! Now it springs up; do you not perceive it? I am making a way in the desert and streams in the wasteland. (Isaiah 43: 18 – 19)

Whatever happens in the end, it feels to us like God seeks to do a new thing, to spring forth fresh and new ways of being and doing ministry.  As you can imagine, in many ways our hearts are still in Congo.  We wait on pins and needles to receive more information from our church partner.  During this season of “living in limbo”, we seek to simply “be,” waiting reverently and actively.  Please pray with us, that the road becomes less murky and foggy, and that we will embrace the current fog and make the most of it.

With love, Bob and Kristi