We apologize for the long silence! We just returned from a month of language learning at Lake Munkamba, and are happy to be reconnected to the world via the internet! We will try to share here some of the many things we learned and experienced this month about Congolese culture. First, we have learned that many things are edible which we never would have placed in that category before. For example, caterpillars, grass-hoppers, termites, snakes, some ants, just to name a few. We learned that April is the month where ‘milongo’ and their cousin ‘lunana’ (both in the termite family, we think) can be found.

From our observation, it is primarily children who catch the milongo within the village. Here is the process. The milongo are underground, and emerge in the evening and fly away. In order to catch them, you have to be ready: First, a small ‘house’ is built from some sticks or reeds. A small hole is dug on one side to collect the milongo. 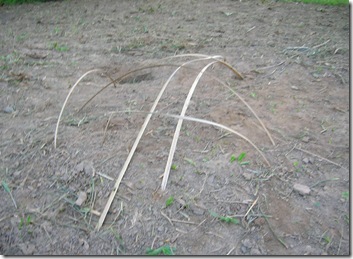 Then, the ‘house’ is covered, so that when the milongo emerge, they are trapped under the cover. Then, you wait for the milongo to emerge. Just as the sun goes down, they start to come out of the ground. They get trapped under the cover, and eventually move into the hole in their attempt to get out into the air. Kids come from everywhere to collect the milongo from the hole or pick them out from under the cover. 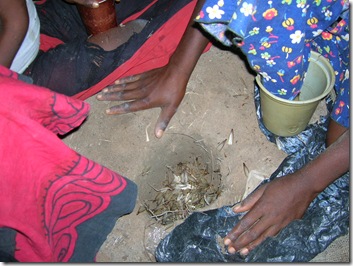 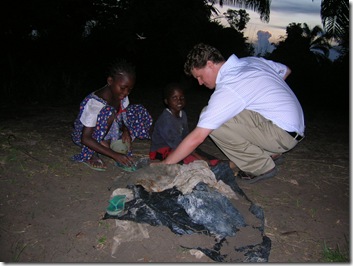 Most kids eat the milongo as fast as they can grab them, at the same time they are collecting them in a cup. The ones in the cup can be shared with the family—either eaten live, or fried. Bob was the first of us to try eating a live milongo, and he said it wasn’t too bad! One evening when we were doing our rounds of Thiluba practice in the village, the hour of milongo came, and it turned out to be a particularly good day for milongo. The kids who were accompanying us would race off to one spot or another where the milongo were emerging, grab a few for a snack, then rejoin us for a few minutes before flying off to the next milongo site. It was amusing to watch!

The cousin of milongo, lunana, emerges from underground after a big rain. April is the end of the spring rainy season, so we had several good days of lunana. Several hours after the rain, the lunana will emerge and start to fly away. From a distance, it looks almost like smoke, or a fountain of small butterflies. Kids will flock to the site, and collect the lunana and eat them or save them to be cooked later. One day we were in the middle of our Tshiluba lessons when the lunana emerged, and we decided it was time for a cultural lesson and a taste test. We have a video of Kristi eating a lunana, but have not yet been able to upload it. We’ll link it in if we’re able!

That day, we hired a couple of kids to collect a cup-ful for us to fry for lunch. We didn’t realize that caterpillars were already on the menu for lunch, as well as fish, so we ate big that day. At the end of the meal, Bob said “I think I’ve reached my maximum of insects for the day!”