Our experiment with CSA

We've heard about CSA's (Community Supported Agriculture) from several people, and it sounded like a great way to eat healthy organic veggies and also support local farmers. Then, we heard from our neighbors that a CSA farm was doing a drop-off in Pasadena, and we decided to take the plunge and try it! Fortunately, our CSA doesn't require an annual commitment, which helped us be willing to give it a try. 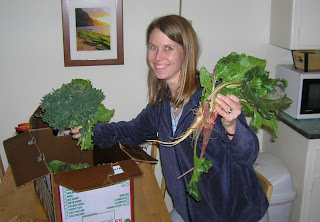 Since we started in December, we've become very familiar with many winter vegetables and greens--many of which I had never heard of or seen before. Kale, collard greens, mustard greens, swiss chard, beets, radishes, carrots, eggplant, kohlrabi, and turnips are just some of the things that we've had in our box. We only get 1/2 a box, but even so we have to work hard to find ways to use everything--especially the greens! We have succeeded thoughg--it makes us feel so healthy eating these vitamin-packed organic vegetables! 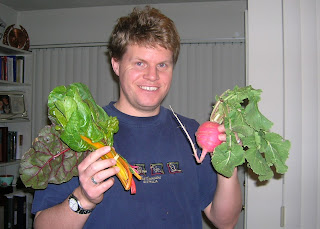 Look at the size of that radish!

So--what is kohlrabi and how in the world do you eat it?? And I'm not a fan of radishes, so what am I supposed to do with the endless supply we have? Fortunately, I already had a cookbook that is ideal for CSA users--it is sorted by season and has recipes for many of these lesser-known vegetables, and even a glossary with pictures and explanations of how to cook each vegetable! Simply in Season is now our most-used cookbook with lots of post-its and notes thoughout. Also, serendipitously we have a couple of neighbors who grew up in families that gardened these types of vegetables. The husband says he ate a kohlrabi every morning before he went to school!

So--how do we use these vegetables? Some of our favorite meals with the CSA veggies have been: Swiss chard cheese bake, greens with peanut sauce, vegetable soup, stir-fry, and quiche with kale and whatever other veggies we have on hand. We realized that one of the side-effects of having all these vegetables waiting to be used is that we have been eating more vegetarian meals, which also adds to the health benefits! We're still experimenting-- fortunately the vegetables change with the seasons so we get to continue to try new things! :) 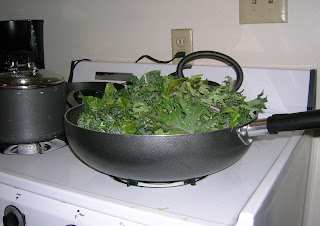 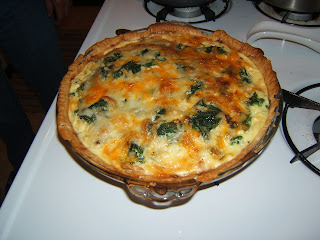 Quiche with kale and other veggies
Posted by Kristi at 8:23 PM 1 comment:

Last weekend we were supposed to go on a retreat in the mountains with the Fuller Presbyterians. We were SO excited about this chance to get away, be with friends, and play in the SNOW. I was almost jumping up and down as we packed up the car, I was so excited. It was raining at the time, and we knew it was snowing in the mountains we were headed to. We had chains for the tires. We were prepared. We caravaned with another car, and took a quick pit-stop at the end of the freeway before we started up the mountain road. That quick pit-stop turned into a long conference between a few of the cars as we heard from others about the bad conditions and accidents on the mountain roads. Finally, in the interest of safety, they decided to reschedule the retreat. So...back we head to Pasadena, terribly disappointed. Our consolation that night was going to dinner with other who we were traveling with at a fun hole-in-the-wall noodle shop. 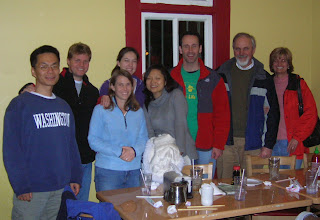 Saturday morning, we decided that since there were several people like us whose plans had been suddenly rearranged, we would invite those people over for a worship night. We had a great time Saturday with those friends, singing and reflecting on how we have seen God at work around us. It was almost like a retreat...in our living room. :) We were still talking to friends at 11pm--when is the last time we've been up till 11pm??

Sunday, we decided we would relax and do a few things to celebrate Valentines day, since we didn't do that on Saturday. After a few hours of fun reading we had planned to do at the retreat, we were up for our big outing. We hopped on our bikes (the first time EVER we've ridden our bikes together!) and went to McDonalds for lunch! We are generally healthy, cook-at-home people, and I don't think we've been to McDonalds in the last year. But we had a couple of gift certificates to use, so we thoroughly enjoyed our greasy fries and juicy Angus burger. Here's a picture of Bob devouring his burger: 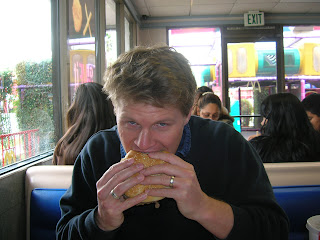 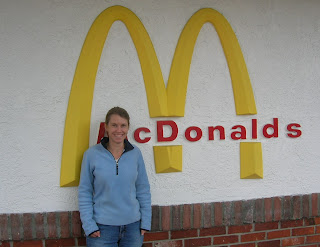 Then, in the evening, to cap off our relaxing weekend, we watched Casablanca. I think it was the first time I've seen the movie all the way through, and it is probably the quinessential classic movie, so it was a great experience. The only glitch was that there were 3 minutes in the middle that refused to play...I guess since we got the movie free from the library, we can't complain, but it was frustrating.

So, that was our retreat-weekend at home. I feel like we made the best of a disappointing weekend, and thoroughly relaxed like we haven't done in too long. We are glad that at least we weren't stuck on a mountain road in the snow for the weekend! :)
Posted by Kristi at 6:22 AM 2 comments:

Quotables - the stuff of life

"The great danger facing all of us...is that some day we may wake up and find that we have been busy with husks and trappings of life and have really missed life itself. That is what one prays one's friends may be spared--satisfaction with a life that...has in it no tingle or thrill that comes from a friendship with the Father."
--Phillips Brooks (1835-1893), Sermons
Quoted in He Loves Me! by Wayne Jacobsen

Posted by Kristi at 5:32 AM No comments:

This weekend we had the privilege of escorting our friend Augustin to visit our good friend Paul, temporarily serving as priest of St. Jude in the Mountains Anglican Church in Tehachapi, CA. Tehachapi is north of LA about 2 hours, in the mountains and near the high desert, so we weren't sure quite what to expect. A poor, rural, mountain town? A cowboy community? Turns, out, Tehachapi is a small but thriving community, that bills itself as the 'land of the 4 seasons' and is where many people like to retire to.

After coming through the desert, we were so impressed at the rolling green hills around Tehachapi. It really is picturesque, with cattle and horses grazing on the hillsides and patches of snow hiding in the shadows. We went to dinner at a small italian restaurant called La Bella Amore Italian Bistro, which had great food and nice live background music. It was such an inviting restaurant that we hung out there for an hour after dinner just to talk and listen to music!

The highlight of the weekend was going to church, of course! Bob and I love the way that Anglicans really focus on the Eucharist in their service and have a sense of the sacred privilege of being in God's presence. Our friend Augustin is now a bishop in Rwanda, and it was wonderful to see the communion and connection of this small church in rural California to their fellow Anglicans in Rwanda. Below is a picture of their altar area (Sacristy, is that the proper term?), and all of us in the church. 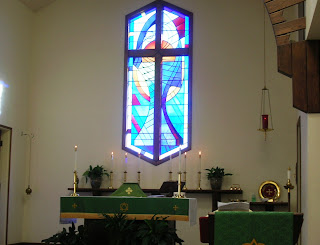 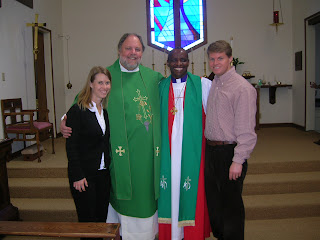 Then we took a drive through the area, appreciating the scenery and looking for a patch of snow so that Augustin could experience snow. It had just snowed a couple of inches 1 week ago, but we were glad it had warmed up to the 50's by the time we were there. :) 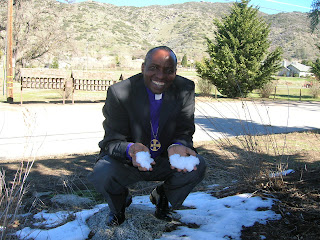 We learned that the hundreds of windmills around Tehachapi are a source of power for Los Angeles and also one of the major source of income for citizens of Tehachapi. One large windmill can produce enough electricity to supply 600 homes!! 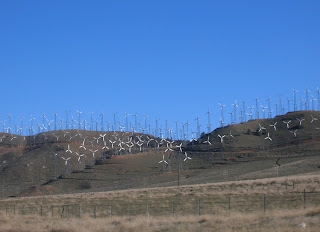 After church when we were talking to people, we heard several people recount that they had considered places all over the US when they retired, and settled on Tehachapi (given, most of them had kids within an hour's drive...) We did actually start joking about buying land for retirement...we decided that we could buy land and share it between the 4 of us...Augustin would use it first, since he is oldest, then Paul, and then us. :)
Posted by Kristi at 5:38 AM 1 comment: