In the midst of our multiple recent moves and transitions I’ve been thinking a lot about possessions. After more than a year in the U.S., we packed up to return to Africa. I struggle every time we go “across the pond” with the tension of wanting to ‘pack light’ and not have too much stuff, versus wanting to have some of those things that will make life easier or which we can not get in Africa—like a bar of chocolate, a fun movie, or enough vitamin C. Most of our possessions had been left in our apartment in Kananga, because we anticipated returning there to continue working. In the process of moving to South Sudan, we anticipated returning to Kananga to say good-bye and collect some of our things. But because of current insecurity around Kananga, we had to plan for the contingency that we might have to cancel those plans at the last minute. Packing felt particularly challenging to me, wanting to bring enough to ‘survive’ if we could not go to Kananga, but also not bringing much since we anticipated getting most of our clothes, books, and other things from Kananga to take to South Sudan.

In the midst of our preparations, we heard from a few colleagues who had been evacuated from South Sudan during times of insecurity wihtin the last 5 years or so…at least two of those colleagues lost everything in the upheaval. They left their homes with a backpack and never returned. One warned us not to take anything to South Sudan that we did not want to lose. But, at the same time, we want to feel ‘at home’ in Juba and settle in there. So how to pack??

Just before we left the U.S. in April, I started reading the book Missions and Money, which explores the issue of ‘affluence’ in the Western missionary movement. Our Western culture is significantly more affluent than the countries we are sent to, especially those that Bob and I have found ourselves in. I am challenged and convicted by reflections from both westerners and Africans about the gulf that can exist between us because of our western sense of self-sufficiency, the value we place on privacy and private ownership, and our abundance of ‘stuff’ that we are so attached to. How can we preach Jesus’ gospel - ‘good news for the poor’—if we are clinging to our Western comforts? And truly, in our personal experience, one of the hardest aspects of living in a country like Congo is being confronted with the struggles of poverty in the people we relate to on a daily basis. 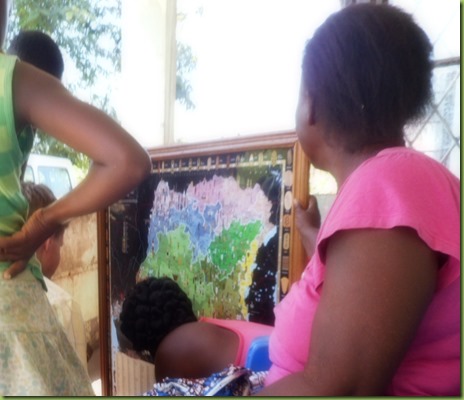 We gave our map of the tribes of Congo (a treasured
posession!) to Pastor Mboyamba’s family

When we arrived in Kananga, I was grateful to see everything in our apartment still there, safe and sound. We collected books – some that have been so useful or insightful to us that they feel like old friends. But at the same time we realized that most of what we found in our house, we could live without, or we could buy another in Juba. We started making piles of clothes, books, kitchen supplies, linens, and other things to give away. We had joked before that our apartment was almost like a museum of local paintings and carved figures—so we picked just a few pieces as momentos and piled up the rest to let our friends choose from. As Bob described in his post about Kananga, whenever friends came to see us and say good-bye, we invited them to take something. Some would ask for something specific – a basin, a radio, a skirt, or a picture of us. It was a little scary for me at first, inviting people to take whatever they wanted, but also very liberating. One friend in Kananga joked that you never realize how much stuff you have until you have to move! We gave away nearly half of our clothes and books, and even with the remaining, it felt like we had too much. Finally, we squeezed our stuff into five suitcases – two of them just for books—and took off from Kananga. Donating some books to UPRECO, the seminary in Kananga 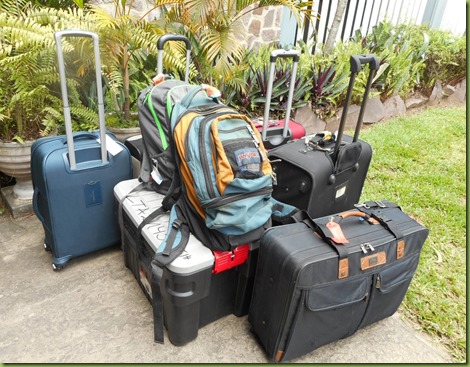 Our baggage as we leave Kinshasa for Juba

We landed in Juba last week with 6 suitcases, and found two there which had been brought previously by our very kind colleagues. A lot of stuff can fit into 8 suitcases! We unpacked, and are settling in to our very nice and modern furnished apartment here in Juba. And now I find myself constantly adding to a mental list of things we need – a frying pan, bowls, tupperware…and of course shelves and baskets to put all the stuff into! I’m trying hard to take it slow and try to get by with less, even if it means washing dishes after every meal or not having exactly the right utinsel. But mostly, I am grateful for this upheaval and long period of transition that has helped me realize how little is really essential, and the value of focusing on relationships and memories that last forever.

“Keep your lives free from the love of money and be content with what you have, because God has said, ‘Never will I leave you; never will I forsake you.” (Hebrews 13:5)

Kristi; this is a wonderful post... esp since the missionary garage sale at church is coming up again! And once again we go thru the house searching for things that we truly CAN live without! Our lives are cluttered by so much stuff in our society... stuff suffocates us!! We're trying to do better at weeding out things that we just don't need or that encumber us ... thank you for being so frank and for being so generous with the things God has blessed you with!

Thanks for the glimpse into your new life. You have me curious about which books made the cut!!! I liked how you shared that your possessions blessed your friends and acquaintances. Thanks!!!! Patti Lacy

Kristi, thanks for sharing your heart felt message on transition, challenge and blessings...words we all need to take in and take action on in our own lives. God is our provider and we, here at home, must remember others less fortunate and be aware of where we 'store our treasures". May each day, even in the midst of challenges, bring new hope, relationships, joy and fruitful outreach...our God is an Awesome God??
Hugs and blessings!

Kristi, in December of 2014 (when the Civil War broke out in South Sudan) there were four of us in Malakal. I had left one week before the war began to spend Christmas in Ethiopia. I took very little with me as I planned to return with supplies. Everything I left behind was lost. The other three were in Malakal when the fighting began and they were evacuated within a couple of weeks. They took very little with them and they too lost everything that was left. I of course thought that I would be back, and so di