For the last seven years Kristi and I have made our home in the city of Kananga in the Democratic Republic of Congo.  For the last seven days we have been in Kananga, spending almost every waking hour either sitting with people we have grown to love or stripping down everything in our apartment that has made it our home.  Today our bodies and our emotions are weary.

On our first full day back we went to visit the grave site of Rev. Dr. Mulumba Musumba Mukundi, who served as the General Secretary of the Congolese Presbyterian Church (CPC) for the past twenty plus years.  Standing over his grave and praying felt like the end of an era.  Mixed with the morose feeling of loss and death were feelings of excitement and new life as we saw one of the graduates of the Ditekemena program for street children who came to greet us at Dr. Mulumba’s grave.  He and his sister are living with their grandmother in a new house built by the program and are worshipping regularly at a local church.  Because Dr. Mulumba has been buried at Ndesha Mission where he served as rector of the University of Sheppards and Lapsley (UPRECO), we were able to give away some books to the school and in doing so were able to spend some time with first year theology students, representatives of the future of the church in Congo.  It was a gift to sit with them, to see their bright faces and to hear briefly about their lives. 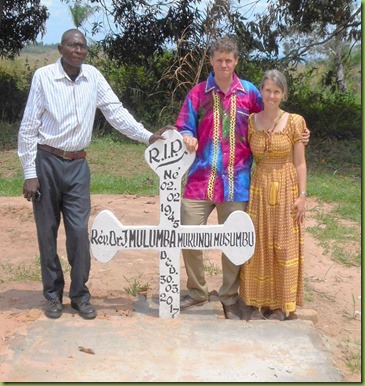 When we arrived in Kananga we promptly informed friends and former colleagues of our presence.  While we only had time to visit a few friends in their homes, most of our time was spend hosting people in our home as we made coffee/tea and made regular runs to buy bottled water, peanuts and bananas to host our guests.  People came in and out of our home during the morning hours or in the afternoon.  We made spending time with people a priority, using hours in the evening and when we had a break during the day to pack up.  Kristi and I guessed the other day that probably an average of 30 people came to see us on most days.  While having so many guests could have been simply overwhelming, somehow God gave us the energy and ability to sit and visit with so many folks who have built rooms in our hearts over the last seven years.  In Kasaian culture, people often ask for something to remember you by when you part ways, so we invited everyone who came to see us to choose something from our house to take as a momento. After watching several people walk out with sacks full of stuff, I commented that perhaps this is how the Egyptians felt, being plundered before the exodus of the Hebrews.  We allowed ourselves to be pillaged in the Name of Jesus! 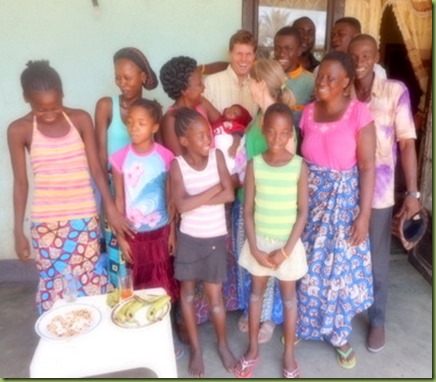 Visiting the family of Pastor Mboyamba 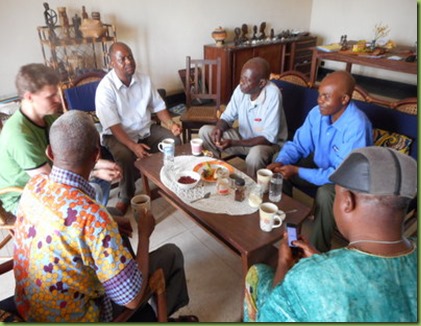 We enjoyed hosting waves of visitors almost every day

The general response from most was excitement and surprise to see us, but then shock and dismay to learn that we would be leaving them.  While we have had time to process this change over the last few months, for most of our Congolese friends it was something new.  One pastor in Kananga had heard through their sister church in the US the news that we would not be returning to live and serve in Congo.  When I called him and told him that we were in Kananga, he was ecstatic.  I remember seeing his face light up across the room when I saw him in our home.  When we then explained to him and others the news that we would be leaving, his enthusiasm faded.  However, being a wise and discerning man, he and I then had a fruitful and affirming conversation about our life of discipleship and how God often takes us down paths unexpected but necessary. 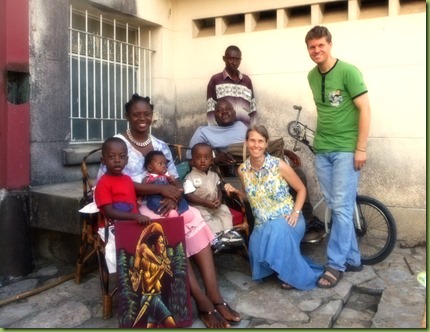 Tatu Willy and Mamu Monica and their three young children 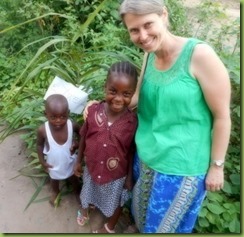 Kristi with Luse Kristi, her “shakena” or namesake, daughter of
Pastor Manyayi and Mamu Biabanya

A couple of conversations and meetings were particularly rough.  One such conversation was with Tatu Sammy, a retired driver for CPC with whom Kristi and I have developed a close bond over the years, travelling all over the Kasai region together.  Sammy sat alone with me in our living room thunderstruck, as if his whole world had been turned upside down.  His tears and lament were palpable; all I could do was sit silently with him in his pain and consternation.  Later that day he came by again and he couldn’t even bear to come inside. Sammy joined a few others who made the final trip to the airport with us yesterday, a ride drenched with immediacy and poignancy.

As we shared our news, we also listened to the news of our friends.  The major theme of what we heard was the insecurity and destruction of human life in Kananga and in the Kasai region.  One whole section of the city has become a ghost town, save the presence of soldiers.  This commune, called Nganza, is wedged between Kananga and the village of Tshikaji.  Government soldiers have sought out militia members in this area, but according to everyone we spoke with, they have killed indiscriminately, taking the lives of innocent men, women and children.  The grisly descriptions we heard were traumatizing.  Other sections of Kananga have been hard hit as well.  Our friend Pastor Manyayi and his family have taken in three extra children in their small home.  The parents of these children are missing.  The story is that the parents fled into the forest, but I wonder if the sad reality is that they will never be returning.  Pastor Mukendi and Mamu Helen, two close friends, have welcomed many into their home which has become like a refugee camp.  Young people are being targeted as members of the growing militia.  People fear for the lives of their children.  The government is showing no quarter.  During most nights during our visit we heard gunshots.  We also heard stories the following morning.  The day we left we saw four huge trucks filled with government soldiers driving into town, a foreboding image of what may lie ahead for those we love in Kananga.  I felt so grieved and angry watching the soldiers in these trucks arrogantly parading power and veiled terror, wanting to do something but feeling paralyzed and helpless.

We knew that our time in Kananga would be good for us and those we saw, but also difficult.  It has given us and our friends and former colleagues the chance to saw “farewell for now.”  It has allowed us to share the depth of feeling we have for each other.  It has allowed us to pray together, break bread together, laugh, cry and fellowship together.  It has reminded us that life can feel capricious and uncertain, yet our faith buoys us as we have the hope of Christ in us, a hope which sustains us and gives us assurance that our our partings are truly only a ‘farewell for now’, that we will see each other again someday, either in this world or in the world to come.  Thanks be to God.

Lord, bless and protect our dear friends in Kananga.

Your words emote passion. Thank you for sharing this process with us all

Bob and Kristi we read this aloud to our children with tears, knowing how difficult this was for both of you... the children are convinced you both are heroes of the faith, giving away everything for the sake of Christ, clinging to nothing but the Gospel. You inspire us, friends! We continue to pray for you daily and know the children are going to remind us to pray for Kananga daily, also... trusting you will have safe travels today!