We are still in Kinshasa, but wanted to give you a brief update on the three Ditekemena kids who were recently operated on in Kananga. They all were discharged from the hospital about 2 weeks ago, and are back at the BICE center with the other kids. They have been given their own ‘sleeping house’, so that they can ensure it is kept clean and sanitary to prevent infection. Caregivers rotate so that someone is available and with them 24 hours a day.

Dominique, who had major surgery on his spine, is now wearing a ‘body cast’ (like a vest to cover his torso) to help him keep his spine straight as he recovers. He is able to walk with the help of a walker, and his wound seems to be healing well. Before the surgery, he could only walk by placing his hands on his thighs to support his torso – so to see him walking upright is amazing! However, he is not eating well and seems to have lost some weight. He is also experiencing some pain in his lower torso. 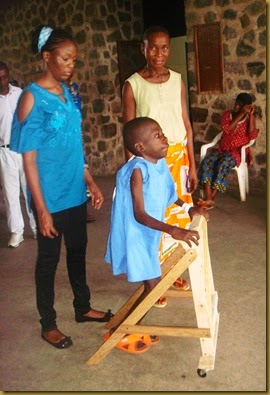 Espoir had surgery to straighten his leg. The leg will remain slightly bent, but is much less pronounced. He is able to walk using crutches and a leg brace. The leg that was operated on can now touch the ground and already hold much of his weight. He has a ‘fixiter’ on his knee to keep the leg in the right position. He is in good spirits, and has started resuming his studies. He is not able to travel to school yet, but his friend Pierre often brings home assignments for him to work on at the center. 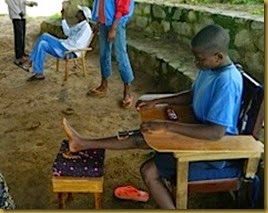 And little Andre, who had surgery on both legs to correct bowed femurs, is also recovering well. He was experiencing some significant pain, but that has improved. He will not be able to put weight on either leg for another six weeks. He has a wheelchair to use though, and is able to get from his sleeping house to the schoolroom in the wheelchair. 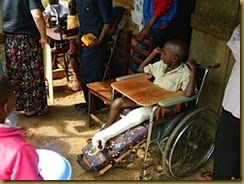 This week, Gwenda, Ruth, and Marcia went out to visit the kids and to deliver some specially made chairs and tables to help these kids be able to do their school-work and sit in a way that will aid rather than hinder their recovery. So, Dominique got a chair that fits him and a stool to rest his feet on. In Kananga, unfortunately, you can not just go out and buy a walker, or a wheelchair, or crutches. So, a walker was custom-built for Dominique, and a wheelchair was borrowed from the hospital for Andre and then modified to accommodate his small frame and need to have his legs straight. 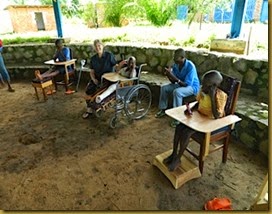 We have also mentioned Kanku, who has cerebral palsy. He did not have surgery, but has been given several exercises to do that should help increase the flexibility in his ankle and the strength in his legs. A boot is being custom-made in Kenya and will be brought in May to help him keep his foot in the correct position. 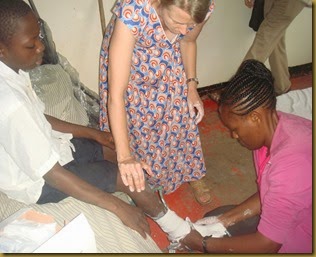 Unintentionally, Bob decided to identify with these Ditekemena kids in their recovery. He fell in Kananga just one week before they had surgery. He hurt his wrist, but it didn’t become apparent that it was broken until we got a second x-ray last week. A very small bone called the scaffoid is broken, so he has been put in a cast that will immobilize his thumb and wrist for 6-8 weeks. So, he is learning to do things with one hand and adjusting to being limited in his activities. We saw God’s provision in some significant ways  in this process of Bob getting treated, so are very grateful for the friends and medical professionals who have helped to discern what the right treatment was and making it happen. 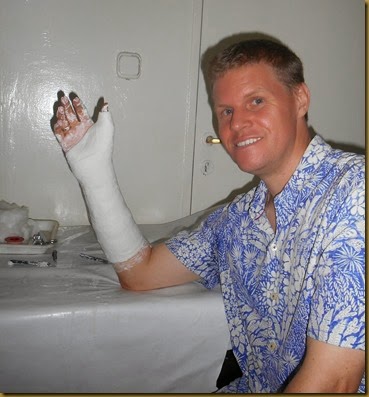 Thank you for your continued prayers for healing for each of these kids (and Bob!). Pray also for the leaders of the Ditekemena program – for wisdom, health, and grace as they care for all of the kids and give special attention to those recovering from surgery.

Kristi,
Thank you for the update, I have been waiting for an update on the kids. Our late son, Holden, had the same surgery as Dominique and Melissa and I know how major that is. What a blessing that it was able to be done there.

We will continue to keep all of you and the children in our prayers. Remind me to share my broken hand story when we return in June; I promise it is more embarrassing than whatever cause Bob to break his.
Regards
Charles Johnson

Kristi,so much good news for all the kids, and that includes Bob! Praising God for the successful surgeries and chairs and crutches to assist the children as they continue to heal. Take care of yourself! ;) Hugs, Lynda