The tide has turned!

Nine companions set out on a journey.  They have an important mission.  To accomplish this mission they will need to overcome hurdle upon hurdle.  Thankfully, they have a leader whom they can trust.  His name is Gandalf.  He is able to do things no other can do.  They love him greatly.  The nine enter a terrible cave.  Even Gandalf has ill feelings about sojourning through this dark nightmare.

In the cave they meet Balrog.  Balrog is like a giant monster.  He is terrible.  He is full of cursedness and hatred and power.  All nine fear this monstrosity.  Gandalf, however, plants himself between this cursed thing and his eight friends.  Gandalf defeats him – but is chastened into the abyss below with this ghoulish, hideous, fire maker.  Gandalf’s friends assume he is gone from them forever. They lament the loss of one so fair, so wise, and so special to them. 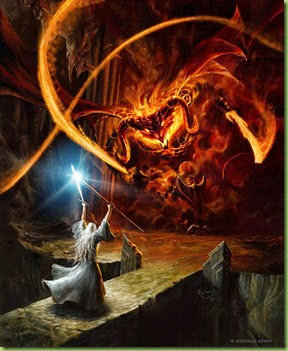 Gandalf stands in the breach, but falls into the abyss

A few days later, three of the companions are in a deep, enchanted forest.  They see an old man and are fearful.  Lost are they in lonely places.  They ask themselves, “Who is this?” They fear he is a sordid image of a dreaded enemy.  The old man first walks slow.  They he moves quickly beyond reason.  Then he scales a small hill in the glint of the eye.  His clothing changes from grey to white.  His long hair appears white.  His eyes look like rays from the sun.  He carries a staff of power.  They draw their own weapons but are vanquished!

At once they feel great fear but also great joy.  Their eyes are opened.  Aragorn, one of the three, exclaims, “Gandalf!”  He gushes, “We had lost hope, but you come to us during our time of need.”  Gandalf sagely and serenely replies, “Be full of joy!  We meet again.  I have passed through fire and deep waters since we were together.  Truly, challenges remain ahead, but the tide has turned!”  Aragorn returns, “Truly, you are our captain and our banner.  Our enemies may have great strength, but we have one who is greater.  It is he who has passed through fire and water; they will fear him.  We will go all places where he leads us.”  The three friends are elated and greatly encouraged to be reunited with their leader.  He has transformed from Gandalf the Grey to Gandalf the White.* 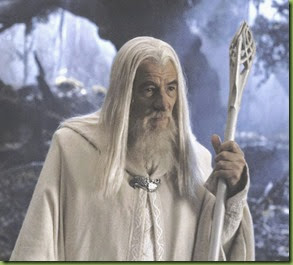 Gandalf the White, returns to his friends

Recently we celebrated a narrative of which the central theme not too different from the story above.  For Jesus also travelled with companions.  He became their leader.  His followers loved him.  Jesus counted these followers as friends, particularly the Twelve.  But Jesus was killed by the chiefs of his people.  They harbored jealousy and hatred towards him.  At Golgotha, the place of execution, many women gathered.  They watched everything from a distance.  Among them was Mary Magdalene, and Mary the mother of James and Joseph, and the mother of the sons of Zebedee.  Jesus had set Mary Magdalene free; she had been in bondage by seven demons.  She and the others loved this Galilean man.  But now they lost hope.  He was gone.  Sorrow flooded their hearts and tears flowed like a river.

Just a few days later Mary Magdalene and the other Mary went to the grave.  They had prepared spices according to their custom.  But when they arrived the very foundations of the earth shook!  An angel of the LORD descended; he wore white clothing, white as snow.  His countenance was like lightning.  The guards shook and became like dead men.  The angel said to the women, “Jesus is not here; for he has been raised as he said…go quickly and tell his disciples, ‘He has been raised from he dead, and indeed he is going ahead of you to Galilee; there you will see him’.”  The women were filled with fear, but with great joy also.  They ran quickly only to find Jesus in their path.  They fell at his feet and worshipped him.  Jesus comforted them and encouraged them also to go to Galilee.

During this season of Eastertide, be encouraged in spirit.  The death and resurrection of Christ our Savior stand as the fulcrum of time and space and herald a new era into which all things will indeed become new.  We remain with challenges in this world, but our leader has overcome sin and death.  Like Gandalf, our captain and our banner has overcome.  The tide has indeed turned!  Jesus, the Lord of life, is alive.  Be of good cheer. 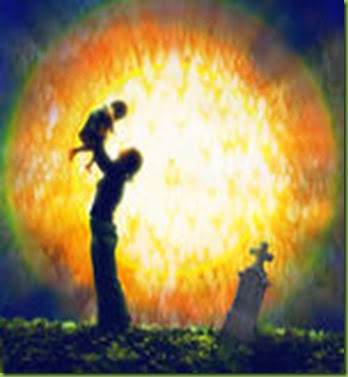 All things will be made new!

*these are not exact quotes from the Two Towers, the second in the Lord of the Rings trilogy.  But they are close.  .

Bob - Great post. May we indeed celebrate during this season that Jesus overcame sin and death and indeed have hope for a vibrant future for all!