Behind the Beautiful Forevers

In a slight divergence from life in Congo, I’d like to tell you about a book that I finished reading last week. It was significantly moving and enlightening, and I saw lots of parallels to the lives of people around us here in Congo. The book is Behind the Beautiful Forevers: life, death, and hope in a Mumbai undercity by Katherine Boo. 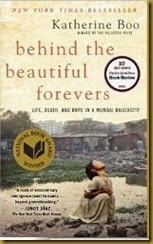 Behind the Beautiful Forevers was an excellent book, in turns moving and frustrating, really drawing me into the lives of those in the Annawadi slum. I was drawn in to the life of Abdul and the Hussain family as they dream and work steadily for a better life through reselling recyclable materials found by scavengers. I felt for Manju as she struggled with her mother’s lust for power at the expense of their neighbors. I found it frustrating to read, at times, because the injustice, corruption, impact of poverty, and jealousy of neighbors that is described so well seemed too “close to home” and similar to the struggles that I see around us here in Congo. It was not the novel to read for a “refreshing escape”.

That said, Katherine Boo often articulated someone’s mindset or revealed the broader impact of certain events in a poignant and insightful way. She put words to things that I had vaguely sensed but failed to yet put together the puzzle pieces or articulate the truth. One such quote is “Among the poor, there was no doubt that instability fostered ingenuity, but over time the lack of a link between effort and result could become debilitating. ‘We try so many things,’ as one Annawadi girl put it, ‘but the world doesn’t move in our favor.’” (Page 219). As we see families struggling against the impending destruction of their slum, they continue to fall victim to exploitation by others with slightly more advantage– sometimes even neighbors. Boo reflects, “Instead, powerless individuals blamed other powerless individuals for what they lacked. Sometimes they tried to destroy one another. Sometimes, like Fatima, they destroyed themselves in the process. When they were fortunate, like Asha, they improved their lots by beggaring the life chance of other poor people.”

I admit that I read this on Kindle and received it as a gift from a family member, and thought, all the way through the book, that it was a novel. But the most profound thing about Behind the Beautiful Forevers is revealed in the author’s note at the end – that all the people, events, names and conversations in this book are true. The intense research and reporting that Boo did over the course of 3 years in the slum of Annawadi is incredible. The realization that this is the life story of a real community gives weight to the experiences of the people we meet in the book. This is not a generalization or just the perception of a writer of what the impact of poverty might be like in a slum. Boo’s intense reporting to convey the real life experiences, combined with her experience as a journalist reporting on other poor communities certainly gives her the ability and authority to articulate the impact of poverty as she does so well. This is one of many books that significantly help those of us who don’t fall under the poverty line in our respective countries to understand the lives of those who bear the brunt of the impact of poverty.

Even if, like me, you have not yet been to India, I highly recommend this book! And if you do read it or have read it already, I would love to hear your reflections!