This past Sunday was the official establishing of a new parish in Kananga: “Oasis Butoke.” We were able to worship with them the previous week, when it was still considered an ‘evangelistic circle’, and we were very excited by this thriving new growth in the church. On the edge of Kananga, and literally next-door to the airport, Christians are surmounting the obstacles to gather to worship.

Pastor Thierre was assigned this section of town 2 years ago to start a new church. He teaches high-school geography full time in order to support his family, then travels the 5 kilometers out to Oasis (pronounced in French like “owaazees”) in his spare time to visit members of the community and facilitate the church. Pastor Thierre has a gift for evangelism and a passion to make God’s grace known, which we could see from the fast growth of this new church! He was allowed to use an unused school building for the church to meet in, which appeared to my American eyes like a run-down stable or shed—but they make it functional! 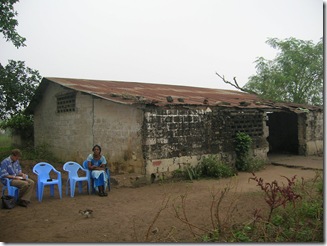 People bring chairs from their homes, and some kids sit on mats on the floor or crowd onto school benches. They pack 100+ people in a small space! It started raining during the service (a big surprise for dry season!), and the dark clouds made it hard to see. People moved out of the way of the rain dripping through the roof, and they found a few candles and a lantern so that the pastor could read from the Bible. 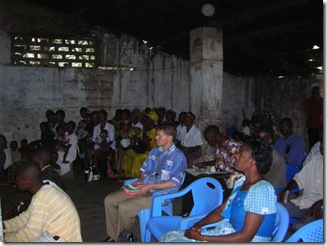 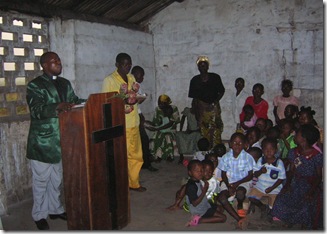 I will admit that on this particular Sunday, I woke up overwhelmed by the frustrations of life in Kananga. We are in the midst of culture shock, and sometimes simple things like not having electricity in the house or having to cook with charcoal seem unbearable. In the face of my own frustrations, it was very inspiring to be worshipping with these fellow Christians whose lives are a daily struggle.

Because this is a new church, many of the people who attend have not grown up in the church. They are recent discoverers of God’s grace and forgiveness, which makes them hungry to know about God. Pastor Thierre laments that most of them do not have Bibles, and the church does not have the resources to provide the Bibles.

In the classic style we have seen throughout Kananga, they had at least 3 choirs, even if they only had a few people in the choir. Everyone enjoyed the dancing and energetic singing as we gave our offerings. Bob participated by giving a pastoral prayer and the benediction. After the service, Pastor Thierre invited Bob to join him in praying for children. We had some fun singing with the kids and asking them questions while we waited for the rain to stop. 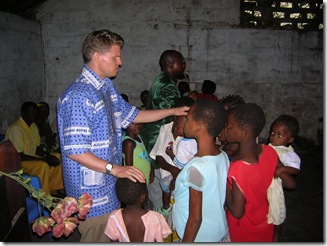 We were served a nice meal of bidia and goat meat, and sent home with a gift of some pineapples from the church. We returned home with renewed hope and excitement for how God is revealing Himself to people in Kasai. We are eager to see the continued development of new church projects like Oasis!

Thanks Bob and Kristi, I love reading your updates and seeing your pictures! God bless you both!

Oh, dear ones, thank you for giving us a snapshot of those who SO hunger and thirst after God's word.

What would be the best way to get Bibles to your people?

Praying for your continued adjustment.
The Lacys

Prayers being lifted up for you, especially through the "down cycles" of cross cultural adjustment. As you know in your head - but probably have a hard time feeling in your heart, at times - it will get better! Thank you for your service and for sharing your stories with all of us on the internet.