It was about 7:15pm and I heard a voice from the street calling my name (or calling one of my Tshiluba names!), “Muambi Losa.”  It was Pastor Kabaseli, who had come to take us to the monthly all-night prayer meeting of the Kananga Presbytery.  As we walked through the now-darkened streets, Pastor Kabaseli told us about the history of these prayer meetings.  “We began these meetings about ten years ago,” he said, “to revive and strengthen the faith of believers in the church…in these meetings, God often shows us things that He wants to do.”

Both in Rwanda and in Pasadena (CA), I (Bob) have been involved in different all-night prayer meetings and prayer ministries.  In my experience, I have found that these all-night meetings require perseverance (to pray for such an extended period), but they can refresh one’s spirit in powerful and profound ways.  It is a wonderful opportunity to have extended time with the Lord, to lift up His name in extended worship, and to bring before His throne petitions and requests.  Another hallmark of these meetings is that it is usually difficult to mobilize large numbers of people to attend…mainly because it is an all-night meeting!

Having walked forty-five minutes across town, Pastor Kabaseli pointed to a lighted building not too far in the distance.  “There is the church,” he said.  As we approached, we were amazed that there were people all the way outside the door, seated on benches and worshiping.  When we entered the church building, we were amazed to find women, children, youth, and men of all ages strewn everywhere.  All the benches had been moved out and the sanctuary looked like a refugee camp.  In a small-to-medium sized building, there must have been 4-500 people!  “Wow,” we thought to ourselves, “this is unreal.”  Pastor Kabaseli would be leading the meeting, so he took us up front as we inauspiciously sat behind the podium with some church leaders.

After some delay and preparation, the meeting began about an hour later.  During this waiting time, youth led everyone in animated worship.  When the meeting formally began, we were amazed, impressed and blessed by the burst of sound as everyone prayed out-loud, without inhibition.  Some refer to it as “Korean style prayer,” but the idea is that the leader gives out direction for certain themes to pray for, and everyone prays out-loud at the same time.  Everyone prayed…I mean everyone.  We were loud!  This was a powerful meeting, and the fervency of these pray-ers lasted until 6:30 in the morning (though we did take a break for rest in the middle of the night).   At different times in the night, Pastor Thierre, a new friend, would bring people forward who were sick and we would pray for them.  Later, Pastor Thierre took me down into the crowd to pray for children (to pray for their health, etc).  I cannot even count how many children we prayed for.  It was exhausting work, but exhilarating!!!

So far here in Congo we have been exposed to the life of the Congolese Presbyterian Church (CPC).  We have been impressed with how well mobilized and organized the church is.  The CPC has an impressive history and continues to have a strong presence.  Yet, in our exposure to the life of the church, I was still looking for that place of real fervency and passion.  Where is that place where people are absolutely desperate for God’s presence and power?  Where is that place where people know they have a need for forgiveness and know the forgiveness that God alone offers?  Where is that place where people can worship their King with absolute abandon and have freedom in the Spirit?  On this night and in this church, we found ‘that place’.  People here were desperate for God, and my heart was touched…profoundly.  I felt so encouraged to be part of this meeting.  Our hearts soared during this prayer meeting and afterwards.  God ministered His peace and His presence and His love to us in remarkable ways.  We joined the others in praying and praising with abandon!  We would not soon forget this night…and, we look forward to the next all-night meeting next month. 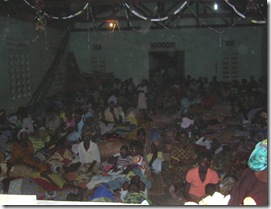