Last week we were invited to go to Demba for an annual congress of the Laity of CPC. It was a good introduction for us to the life of the church and some of the challenges that many people in Congo face in their daily lives. We realized (not for the first time!) that our expectations here need to be adjusted, and that we have a lot to learn!

We arrived on Monday around noon, because the meeting was supposed to have started Monday morning. When we arrived, we learned that the 2 cars traveling from Mbuji Mayi (in East Kasai) had trouble on the road and were stuck somewhere near Kananga. There were 20+ people in those 2 cars, and they had spent the night on the road because of the car trouble. The meeting would not start without them, because the leaders determined that it would not be right to begin without representation from this significant region. The cars arrived that evening, and the meeting began the following morning. We were impressed with the culture that would value the event (e.g. everyone being there to participate) over the time (e.g. starting at the appointed time/day).

Many of the people attending the meeting had made extraordinary efforts to be there. Many had come by foot—20km, 60km, even some women who walked more than 200 km! Others had come by bicycle, often traveling for several days. Those few fortunate to find a ride in a CPC vehicle also had challenges, like spending the night on the road. The roads in Congo are incredible…like nothing we have ever seen. Travel here is definitely not something for the faint of heart! 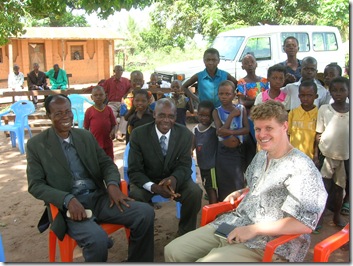 Elder Bungibuabo Jean, center, is
66 years old and rode a bicycle at
least 200 km to the meeting!

We did not understand very much of the meeting with our limited Tshiluba, but we were able to introduce ourselves and give greetings in the meeting and got to know many of the leaders who attended. During the meeting, reports from each region were given about projects that are being undertaken to help meet people’s physical needs, as well as activities of the churches. They then broke up into committee groups to discuss specific topics and make decisions about future actions.

One of the key learning times was our ride home. It rained hard Wednesday morning, so we waited for the rain to finish before departing for Kananga. We were barely out of the city of Demba when we faced the first rough spot. I (Kristi) thought it was DEFINITELY impassable, as the road was split into 2 levels with about a 3-foot gap, with gullies made from the rain. Tatu Sammy (our driver) plunged in, and after some precarious leaning to either side, we were through. “injila wa Congo!” (“The roads of Congo!”) Bob shouted out as we continued. There were two spots where we got stuck in the mud going up a hill. There were about 12 of us packed into a land-cruiser, so in those spots everyone got out, they took out the shovel and cleared a path. At the second spot (A rather long hill that was VERY muddy), I was poised to take a short video as we drove up the hill, but was too scared as I watched the vehicle sliding and lurching that I couldn’t bring myself to record it! One vivid picture was after one of those rough spots—as people were getting back in the vehicle, we heard some squawking and realized there were chickens in the back. One of the passengers got in, collected the 2 (live) chickens, put them back into the plastic bag they had been in, and stuffed them under the seat. Isn’t that what you always do with chickens?? 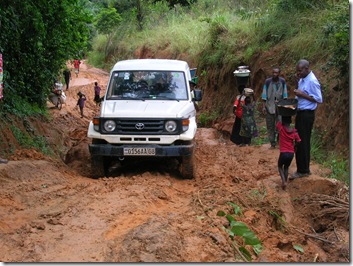 We were struck by the poverty around us as we drove—children with distended stomachs from malnutrition, the many bicycle porters who have a risky and difficult journey, the poorly constructed mud-brick houses. The most disturbing event of the journey was coming upon a dead body laying at the side of the road. One of the pastors in the car with us recognized the man, and we learned that he had died the night before near Demba, where we were coming from. Because he lived in Kananga, they sent the body back to Kananga for burial. The motorcycle carrying the body had some trouble, and had to leave the body in the road. We were not able to take the body with us, but we met the elder brother in the next village, then farther down the road saw the wife of the deceased arriving on a moto, followed by a moto carrying a coffin. It is so hard to see situations like this…we have seen people stretch resources here in amazing ways, but that also means there is suffering in the process.

Love the pictures and love you guys!

Can't wait for you to blog sometime about your recent meal ;-)

Bob and Kristi, you guys are just fantastic. I am originally from Kananga / Congo. I attended Katubue High School and even saw Tshikaji Hospital in full construction. I’ve been living here in USA for the last past 18 years. The last time I was in Kananga was 25 years ago. I still have family there but what I read in your blog leaves me speechless. I’ll be checking in every day. There is over 100,000 people from Kananga who leave here in USA and whom I can reach out to if anything we can do to support your mission. Good luck and tuasakidila ya bungi for sharing the pictures. God bless you guys. Benoit