Last week Kristi and I made a trip to Demba, a town 60k north from where we live in Kananga.  On the way, we were introduced to the “Bayanda.”  The ‘Bayanda’, mostly young men, essentially serve as the lorries (trucks) of the country.  On bicycles, they haul loads of at least 200 kilograms and travel distances up to 400 kilometers.  Their bicycles are so loaded down that they cannot usually ride them.  They simply push them through mud and sand.  It looks like endless, arduous work that requires enormous physical strength and stamina.  We are told that many of the Bayanda are college-educated, but are not able to find jobs in the country and are thus relegated to this harsh labor.  They are paid very little, and they sleep outside in the bush.  We are told that because the Bayanda serve this critical role of transporting goods, prices are kept low in the towns for the general population.  Thus, they serve a vital function for the Congolese local economy, just as truckers play a significant role in the economy of the United States.

Tragically however, the Bayanda live a deplorable life.  We are told that some Bayanda die on the road due to exposure and exhaustion.  On our way to Demba, one of the Bayanda yelled to us from his bike, “Hey you Europeans (Americans), see how we Africans suffer!”  His comment was poignant, and caused me to pause.  Kristi and I have recently felt “shell shocked” by the poverty and challenges faced by our Congolese brothers and sisters.  The life of the Bayanda serves as a glimpse into the harsh realities faced by the people of Congo. 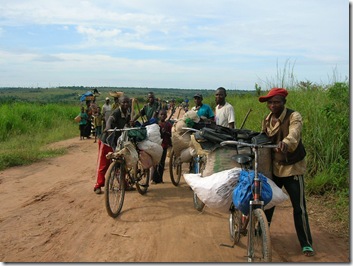 Bayanda, on the road a few kilometers south from where we have been living.

I road my bike today...but no loads like this one! Thanks for the insights into everyday living there.

Just a quick note to say hello and thank you for your communications through your blog postings. Please send me your email also. Pleased to share that Will email you shortly. you are in our prayers.
Ebralie

Glad to have just found your blog! Reminds me of so much of my own visits to Kinshasa and beyond. But have never had the privlege of goign to Kananga but know lots of people from Kasai. Hopefully one day I will make it.