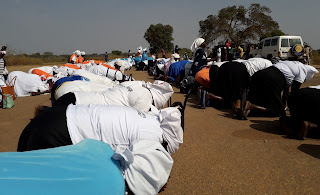 Women kneeling in prayer on the road

We knelt on the pavement, three long lines of women. One women at a time led in prayer, acknowledging our need and crying out for God’s intervention in South Sudan. The rest of us joined in, praying silently or quietly, and I could feel the collective passion as we publicly prayed together. Women from different denominations took turns leading specific prayers – for soldiers who are hungry and underpaid, for youth who are sucked into the gang and drug culture, for leaders implementing the peace agreement, for the economy and jobs, and for our churches and families. It was about ten o’clock in the morning, but the sun was already hot. Lively worship interspersed the times of prayer, and several women who had been passing by got in line to join the prayers. 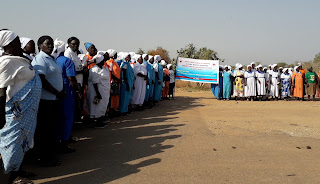 The opening of the prayer march

After praying and singing at the starting point for nearly an hour, we marched about 2 miles on a narrow dirt road to a village called Kwarijic, singing along the way and stopping three times to pray. A woman washing clothes in the stream waved in encouragement as we passed, and barefoot women carrying bundles of long sticks on their heads smiled in greeting. 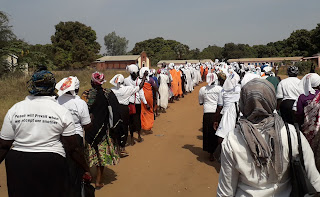 The women approach the village of Kwarijic

We gathered in the village’s Catholic Church, continuing our prayers and worship, and encouraged by a word from the local priest about prayer connecting us to God’s infinite power. The women’s theme this year is Romans 12:12 “Be joyful in hope, patient in affliction, faithful in prayer.” These women reflect that verse well – I was encouraged by the hope expressed, rooted in faith and God’s faithfulness. One woman exhorted everyone to get up at 1 A.M. to pray – because that was an hour when they could find quiet and focus. When I was invited to give a word of greeting, I extended greetings from the many churches we visited last year, and told them that they are an example for us in America of commitment to prayer. 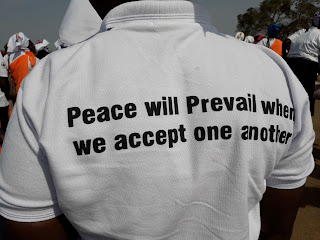 Agnes Wasuk, Director of Women’s programs at the South Sudan Council of Churches, has been organizing these ecumenical prayer gatherings for 6 years – a beautiful expression of unity and faith. For real change and healing in South Sudan, it will take not just the decisions of political leaders, but also the unity and commitment by people at the grassroots. After being away for six months, I was excited to join them again, especially because the increased atmosphere of peace around Juba meant that they could hold the prayers at a church outside of the city. When I reached home in the afternoon, my whole body felt tired, but I was energized and inspired by the sense of hope and grateful for the gift of joining these women in prayer. 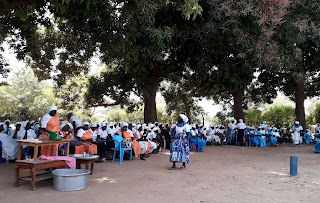 Sharing tea and bread in the shade near the church

Women will lead the peace effort. Thanks for highlighting their prayers.

Blessings. Your ministry has been superb.