Visit to the camp

It was only seven-thirty in the morning as our motorcycle taxis navigated the puddles on the muddy road that led to the big camp at the edge of town. As we came over the hill, the expanse of white tents came into view, which stretched as far as we could see. Later, one of the pastors would ask, half-joking, “Do you see our white city? This is our Jerusalem!” This was POC3 (Protection of Civilians Camp 3), for South Sudanese people displaced from their homes. We had come on this Sunday morning to join them for church.

The strong voices of the youth belted out their song in such an arresting way, and made me wish I could understand the Nuer language that they were singing. The pastor whispered to us that they were singing about their suffering, and asking whether it was because of their sin, or the sin of Adam or their ancestors that the suffering had come. Another youth choir followed, singing a song of lament about the suffering in South Sudan. “We are all scattered;” they sang, “we listen for sounds of peace, but there are none.” A third choir of youth sang later, about Jesus being our light in the midst of the darkness. It was evident that all of the congregation enjoyed the choirs and resonated with their songs. One woman, in particular, danced up and down the aisles during the songs, while holding high a small wooden cross.

A short clip of the first youth choir - an impressive group!

Bob preached from Lamentations 5, which describes the suffering of Israel as they are in exile. This chapter describes several specific aspects of Israel’s suffering that are true for the South Sudanese, thousands of years later. Homes being taken by foreigners, women raped, even going to gather firewood for cooking at the risk of their lives, This, of course, is why the Bible speaks to us today – because just as the suffering is the same, God’s power and promises are also the same today. Bob reminded us of reasons for hope that we find in the midst of the suffering described in Lamentations: That God invites us to express our laments, and He hears us; that God grieves with us in our suffering; and that God has the final word (and not any of the governments or leaders that appear to hold people’s fate in their hands). As Bob finished his sermon, one woman sitting near the pupit solemnly came to shake Bob’s hand. Several others followed, wanting to express appreciation, even as the service continued. 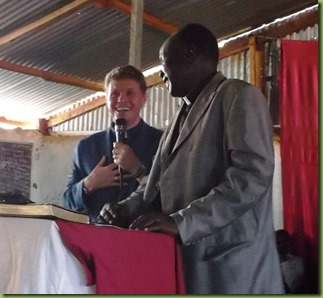 After the service, we followed Pastor Peter and several elders, winding our way through the narrow paths between tents to reach the pastor’s tent. Pastor Peter built the home himself, using sticks for a frame that is covered with the UN-issued white tarp. They brought in several bowls of food, meat broth, fish, kisra (a thin dough/bread like Ethiopian injira), and kop (a small grain a little like rice). It felt like an extravagant gift of food, especially as we discussed the challenges that many of these people have endured. We learned that the pastor’s wife left him in the midst of her trauma of losing a child in childbirth. An older woman, who is an elder in the church, has no family because all of her children and close family have died in the conflict. 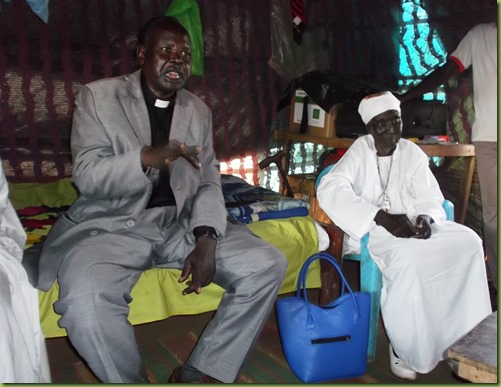 Pastor Peter, sitting on the bed in his home in the camp;
a woman elder of the church is to his left.

Yet, in the midst of the long period of dispalcement and suffering, these faithful people persevere. The church hosts Good Shepherd Primary School in its building – 2000 students study in clusters around the large sanctuary, without any barriers to block the noise or teaching of the class next to them. Several of the members serve as voluntary teachers, wanting their children to get some education. Pastor Peter has lobbied to try to get a separate building for the school, but has not yet found the funds and permissions. 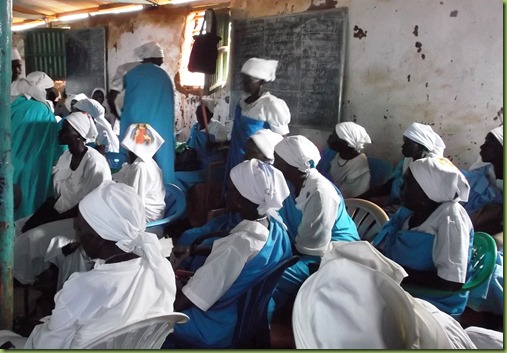 The women’s section of the church – you can see a blackboard
on the wall that is used for the primary school.

As we prepared to leave, Pastor Peter expressed his appreciation to us for coming to worship with them. He said that our presence is a tangible reminder that they are not forgotten. We know that many of you far away are interceding for South Sudan, advocating for peace, and even contributing to efforts like education in the midst of the displacement. It is our privilege, in being present in South Sudan, to represent and communicate the concern and prayers of many of you. So, of course, we felt that Pastor Peter deserved our appreciation even more, for inspiring us with the faith and perseverance of these Christians, who gather to worship and seek God together in the midst of suffering.
Posted by Kristi at 2:18 PM