Standing in the Gap

I just returned from an incredible three weeks of training about “Healing the Wounds of Ethnic Conflict”. During the first week, we went through the workshop ourselves, and then the second week we were trained in how to facilitate the workshop for others, and finally in the third week we did a practicum where we actually went out and DID it – facilitated workshops in the community, along with a coach to evaluate and help us. As we went through the workshop ourselves the first week, I felt like every day I was crying or on the brink of tears as we reflected on pain that we have experienced, and heard testimonies of incredible forgiveness. It is hard to encapsulate the essence of this signficant experience in a few sentences, but essentially the workshop looks at the roots of ethnic conflict within ourselves, and helps people find healing and forgiveness through Christ that hopefully enables that person to forgive others and pursue the unity and healing that God desires of people.

One of the final and particularly emotional sessions is called Standing in the Gap – where individuals are invited to acknowledge and repent on behalf of a group of people that they identify with, for wrongs done by themselves or their group to another group of people. One of the facilitators from the U.K. started the session by acknowledging and repenting of the harmful and derogatory actions of the U.K. towards Africa in the last few hundred years – including dividing countries according to their own terms, colonizing people, facilitating the slave trade, exploiting natural resources, fostering dependency rather than empowering people….the list could go on. Other people who identify with those who have been wounded are then invited to offer forgiveness. As you can imagine, it is deeply moving to speak out these wounds that are hard to talk about – it is much easier to justify them, or say “but it wasn’t ME who did that…” Several participants in our group followed, acknowledging wrongs done by their country or tribe to another group, or by the church, or by men towards women, or by parents to their children. When a person or group of people has been wounded, the consequences often are felt through generations, and the bitter roots of resentment, prejudice, and anger are hard to get free of (see Hebrews 12:15). Standing in the gap is one part of helping people to find freedom from those bitter roots as we understand more deeply the depth of our sin and the forgivenss that Jesus gives us through the cross.

After the workshop, we visited the genocide memorial museum in Kigali. After immersing ourselves in the horrific history, pictures, and stories of the Rwanda genocide for a few hours, we gathered outside to hear the testimony of two men, Elia and Gaston. Elia is a Hutu who learned as a child from his grandmother’s stories to resent the Tutsi for demeaning the Hutu. When a faction within the government promoted anti-Tutsi propoganda and incited fear, Elia believed he needed to protect his own. When the genocide started, Elia did what he was told, hunting out the Tutsi and brutally killing many people in his community. After the genocide was over, Elia was put in prison for these murders. After serving about 10 years in prison, he confessed his participation in the genocide and was granted early release. He was ashamed of what he had done, knew it was wrong, and lacked peace. He attended one of these Healing the Wounds of Ethnic Conflict workshops in 2003, and recognized the ugly prejudice that had led to his destructive crime. During the standing in the gap session, he publicly confessed his wrong and asked forgiveness. Gaston was also in that workshop, and knew that Elia himself had killed nine members of his wife’s family. But Gaston was the first to offer forgiveness to Elia as a result of himself finding forgiveness and healing through Christ. Gaston and Elia both found peace and freedom through that act of forgiveness, and they worked hard to help others forgive and find peace. 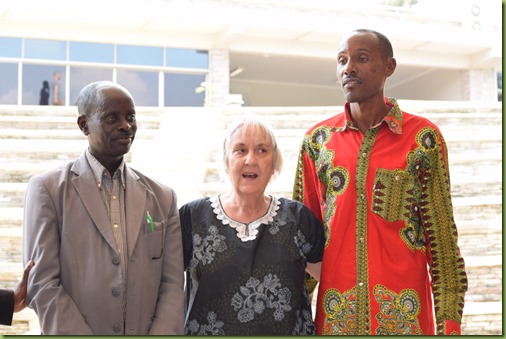 Elia (left), and Gaston (right), with Rhiannon, one of the facilitators of our workshop

Gaston and Elia, who still live in the same community, continue to work together to help others in Rwanda to find healing through Christ from the internal wounds of the genocide. They helped to organize the workshop in their community where I and others did the ‘practicum’ portion of our training. Gaston invited his wife’s sister, Jeanette to the workshop, who still could not bring herself to forgive Elia for taking the lives of so many of her relatives. In the workshop she reviewed again God’s desire for unity and love amongst humanity, the many ways that sin divides us and wounds us, God’s love for us even in the midst of our suffering, and that Jesus came to bear our sin and also our pain and to give us forgiveness and freedom. During this final session of Standing in the Gap, Elia again confessed his participation in the genocide, particularly these people in Jeanette’s family he had killed. This time, Jeanette was able to forgive, even requesting that Elia come to her house so that she could forgive in the presence of her family. Can you imagine losing several members of your familyin a brutal war, and then, even 20 years later, forgiving the murderer? We celebrate that with God this kind of radical forgiveness can and does happen, and that these little acts of forgiveness are what can bring healing to the many places ravaged by war and confict. 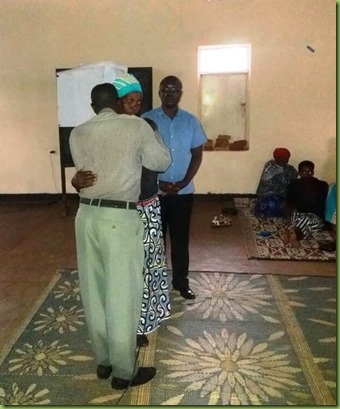 Jeanette hugs Elia as a sign of her forgiveness

Next week we are facilitating this workshop on Healing the Wounds of Ethnic Conflict here in Juba, with the students at Nile Theological College. The conflict in South Sudan has been going for decades, and most people have experienced loss, death, displacement, and worse at some stage. Please pray that God would bring healing, and that we would experience afresh the power of the cross and the forgiveness that Christ gives. Pray that God would raise up people to stand in the gap, acknowledge the pain of others, and confess on behalf of those who did wrong. 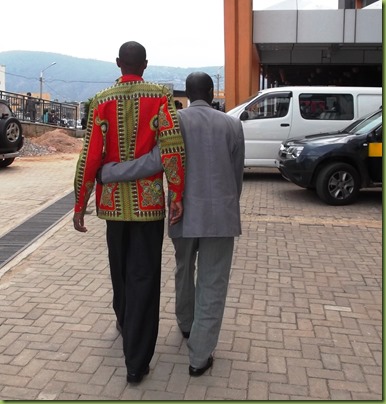 Elia and Gaston, after they shared their testimony with us.
They have forged an unlikely partnership and true friendship.