We have really enjoyed getting to know our Arabic teacher, Elder Charles Peter during our lessons. We hear about his family, his neighborhood, and his work as a missionary, showing the Jesus film and preaching in various parts of town. In Africa you don’t need to wait for an invitation, so one day we told him that we wanted to visit his home. “Wonderful!” He replied in Arabic, “My wife will make kudra for you. It is delicious!”

Last week the big day came. We took two different buses out to Gudele, a district near the edge of town. We met him on a busy street corner, and then took a rickshaw (a three-wheeled covered contraption that holds 4 people) down a dirt road until we reached his neighborhood. Then, a short walk, where we were thrilled to see grass and flowers along the sides of the road and streams that bisect the road (and swell to make them impassable when it rains). In the middle of town where we live in a 4-story building, we are a little starved for nature, so it felt very refreshing to be reminded of what a more typical neighborhood looks like. 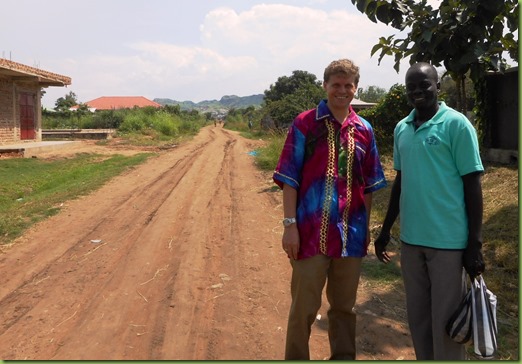 Bob and Charles on the road in Gudele - Enjoying the green!
When we reached the house, we met his wife, son, nephew, and a few neighbors. We were ushered into the
house, and we enjoyed the chance to finally talk with his wife who we had heard so much about. We looked through pictures from their wedding and early years together. We heard more of their experience in Malakal in 2013, when war erupted and they were forced to flee, leaving all of their household possessions to be looted by the invading soldiers. They lived in a UN camp for a few weeks, sleeping under only a tarp, until a friend helped to evacuate them to Uganda. They returned to South Sudan because of a commitment to God’s work here, and their persevering hope and sacrifice to make the gospel known is humbling. Most of our conversation was in Arabic, which meant that sentences had to be repeated sometimes or new words clarified, but still a victory to be able to connect meaningfully in our new language!
Then, lunch was served and the awaited kudra was brought in. Kudra are leaves that are ground and cooked to make a thick green soupy mixture, often with chunks of meat included in it. In Juba kudra is eaten with a starch like kisra (similar to Ethiopian injira) or asiida (like ugali in East Africa). Charles Peter was right—it really was delicious, and Mama Wigdan was vigilant to make sure that our plates were never empty until we were stuffed and protesting that we couldn’t possibly eat any more. 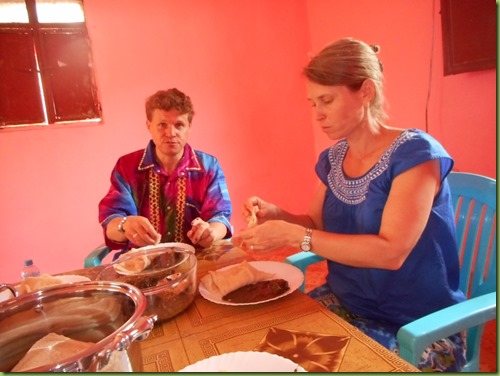 Eating kudra for the first time – a favorite dish in South Sudan
After that great meal, we realized clouds were gathering and we should start the journey home. Charles accompaied us back to the main road, rode the first bus with us and even paid our fare on the second bus back to our part of town. With Bob’s energy still low because of the virus, big outings like this feel very special and appreciated. We felt so grateful for wonderful people like Charles Peter and Wigdan who exemplify to us the warm hospitality of the South Sudanese people. 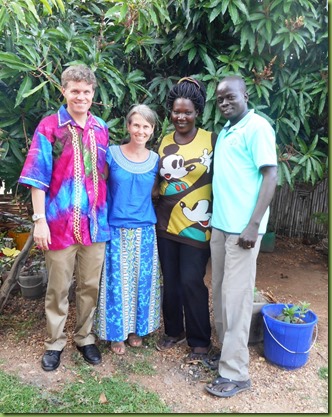 With Charles Peter and Wigdan, at their home
Posted by Kristi at 6:22 PM