As we are moving towards an interesting and polarizing November election here in the United States, the Democratic Republic of Congo, which also has a scheduled November election, is moving closer to the brink of chaos and upheaval.  The President, Joseph Kabila, finishes his second and final term on December 20th, but all signs point to him clinging to power and not stepping down from office.  Opposition groups are raising their voice, and it feels like there is not even enough political goodwill to move a chair from one side of the room to the other.  The government planned and hosted a “national dialogue” with opposition groups, but the opposition chose not to participate because their demand for the release of all political prisoners had not been sufficiently met.

Today, Monday September 19th, planed political protests have transpired in Kinshasa, the capital city.  We have viewed images of smoke from burning cars and tires, alongside angry crowds.  Most schools and shops are closed in Kinshasa, and most people are staying home to avoid unrest.  According to a recent BBC article, 17 people have been killed, including 3 police officers, one of whom was burnt alive.  From the US State Department website, we have learned that the US Special Envoy to the Great Lakes Region of Africa, Tom Perriello, was physically blocked and verbally threatened at N’djili International Airport after ten days of seeking to promote dialogue amongst a wide range of actors in the current political impasse. 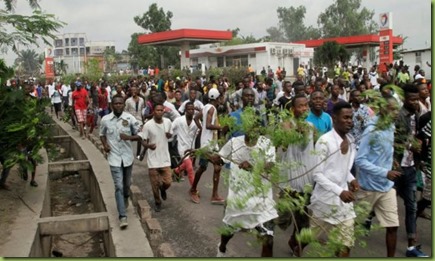 Hundreds have taken to the streets (photo, Reuters) 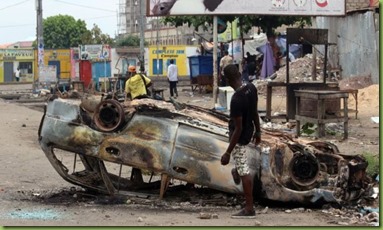 a burned out car in Kinshasa (photo, AP) 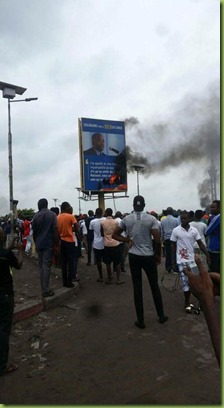 Burning a billboard of President Kabila

Right now it is difficult to know what the short term and longer term picture of Congo will be.  In a recent article, the International Crisis Group, an independent, non-profit, non-governmental organization committed to preventing and resolving deadly conflict, contends that what is needed in DR Congo is a firm but nuanced political approach.  Though frustration with the lack of will by the Congolese government to move forward regarding the democratic process is understandable, what is needed are international actors and partners who are able to provide a consistent stance which provides open communication channels with all parties, including the government, the opposition, and civil society groups, helping all move towards a peaceful transition of power in line with democratic principles.

Please pray with us for a peaceable path forward for the Democratic Republic of Congo.  While we may be caught up in the wiles our our own election cycle, eventualities feel much more grim for people who live in a land we have grown to love.  Thank you!