Matthew 1:23 (NRSV)
23 "Look, the virgin shall conceive and bear a son, and they shall name him Emmanuel," which means, "God is with us."


During this time of year we celebrate the Incarnation of God in Jesus Christ.  As the apostle Matthew quotes the prophet, he shall be called “Emmanuel,” meaning “God with us.”  The Incarnation, or the presence of God amongst us, is probably the most incredible reality we can ever attempt to wrap our minds around.

On Monday night, around 9pm, Kristi and I arrived back to Kananga with six of our colleagues of the Department of Evangelism of the Congolese Presbyterian Community (CPC).  We had just spent 13 days on the road, visiting the two large city centers of Ilebo and Mueka and the famed old mission station of Bulape.  In under two weeks we had logged over 1,000 kilometers on Congo’s infamously deplorable roads.  We are thankful to have returned in good health and to have arrived home safely despite fresh dents on the vehicle and bruises on the body. 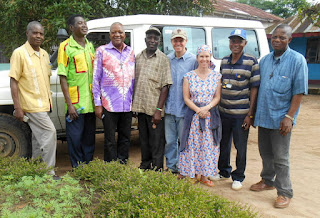 Kristi and I and members of the Department of Evangelism of the CPC;
we enjoyed travelling, working, eating together and laughing a lot! 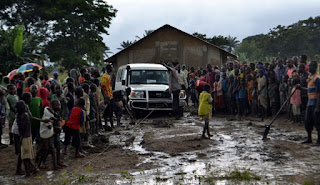 Vehicle stuck in the mud in village of Shinateke, after flash rain storm;
Our winch saved us half a dozen times!

We were privileged to first visit the port city of Ilebo.  Back during the Belgium period, Ilebo was called Port Franqui, named after a Belgium businessman. The name Ilebo is actually not a local Tshiluba word, but rather the Tshiluba-ized version of what Port Franqui was often referred to - “Il est bon!” (It is good!).  When we arrived at the police barrier to the city, we were met by dozens of women and church leaders who were singing and clamoring for us to get out of the car.  We then walked 2-3 kilometers with them to town amidst singing and profound joy.  It was the first time missionaries had visited Ilebo in over two decades.  We were told several times that our visit and our presence was a huge boost to the Presbyterian community in Ilebo.  Everywhere we went we were greeted with intense fanfare and joy-filled song.  We even crossed a river by canoe and rode on the back of motorcycles up and down hills and valleys to visit a very rural parish in the village of Bambanga where the whole town came out to greet us.  We felt like rock stars! 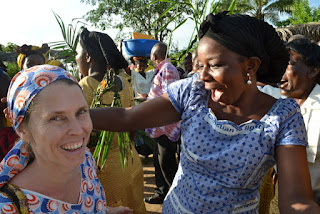 Welcomed with joy at Ilebo city! 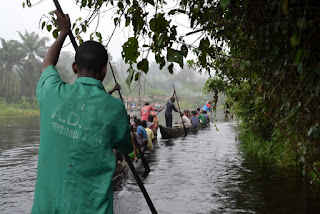 Traversing the Lutshuadi River to reach Bambanga
where the whole village came to greet us!

On our way to Bulape after three action packed days in Ilebo, we were stopped on the road by churches four different times, some of whom came long distances to greet us and escort us back to their parishes where we worshipped and ate with them.  Our presence was a gift and a boon to these rural churches. 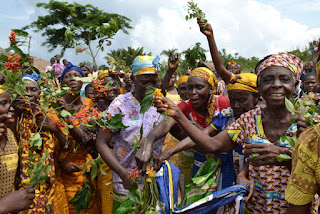 The women of the village of Bena Mulumba
welcome us waving flowers and palm fronds!

We enjoyed a short stay in Bulape where we conducted a Board Meeting for the Pastoral Institute.  At the end of the meeting, the Director of the school told us that he and the staff and students were ebullient that we had come just to visit them; they have often felt overlooked and forgotten.  We also spent time visiting and praying for local parishes and families and all of the local chiefs. 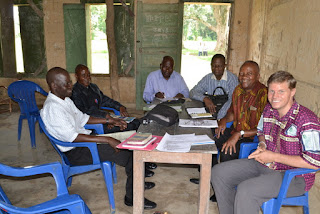 Board meeting with the Pastoral Institute of Bulape

Our last stop was the city of Mueka, the seat of a large territory in the new Province of Kasai (capital is Tshikapa).  Unfortunately, we were not cordially greeted by the majority of CPC churches in the city.  In fact the church where we were planning to meet was barricaded by the youth of that parish.  The CPC Synod Executive of the region chose not to be with us and a disgruntled pastor went on the radio the previous day, saying that he and others did not recognize the authority of one of the leaders we were travelling with.  Sadly, despite all of our overtures, pleading and even humbling ourselves on our knees, this pastor and others refused to join us.  It was a sad reminder that we live in a broken world where relationships and church communities can so easily become fragmented by division and strife.  Thankfully, instead of shaking the dust from our sandals and leaving, we chose to stay.  Working with one CPC church in Mueka, we facilitated a healing and reconciliation workshop which blessed all eighty plus participants who came from all over the region, even from the remotest corners.  At one point during the workshop it felt like we were transported into the heavenly realms! 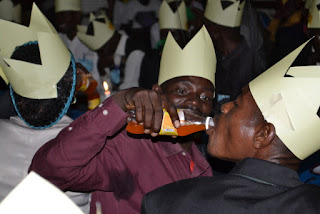 Healing the Wounds of Ethnic Conflict (HWEC) workshop held in Mueka;
members of different nations (tribes) serve one another and
pronounce blessings to each other at “The King’s Table”


The Incarnation is not some theologically aloof concept beyond our lived realities.  It is the actual reality of God with us through the ups and downs of everyday life.  Moreover, as God’s children we have the gift and privilege of incarnating God’s love and care to one another simply through our presence and service.  Here in Congo, that often means simply showing up and visiting people who feel forgotten.  Yes, we will not always be received with gratitude and joy, but neither was Jesus always received in such manner.  But, as the Apostle John relates,  “To all who received [Jesus], who believed in his name, he gave power to become children of God” (John 1: 12).  According to Franciscan priest Father Richard Rohr, the Incarnation exemplifies God’s redeeming work.  It shows that God was saying, “It is good to be human, and God [is] on our side” (Rohr, 2008).


Emmanuel, God with us!
Happy Advent.

What amazing experiences. Thank you for sharing from your hearts. Merry Christmas! The Lord's shalom! Patti & Alan Lacy

thank you for sharing your stories with us. enjoy your personal leave and do take lots of time to refresh and refuel.
we hope you are planning a visit to newark.
love and blessings, betty and bob thompson

Merry Christmas Bob and Kristi. Appreciate your updates and sharing your journey with us. Praise be to God!

Merry Christmas Bob and Kristi from Wellsboro, PA! We love reading and hearing about your journeys. May God Bless you and keep you safe! Blessings! The congregation of First Presbyterian!