‘Mission from the Margins’

Discontinuity, or stepping aside and into new situations and realities, is where we are shaped in unexpected and significant ways.  As an example, Moses was simply out tending the flock one day when he happened to see an unusual sight – a bush which burned but which was not consumed.  It was only because of Moses’ “determined seeing” at this perplexity that God chose to speak to him and reveal God’s purposes.  Moses chose to turn aside from his regular duties, and that is when God reveals His plans and purposes for enslaved Israel (see Exodus chapter 3).

Living in Congo, Kristi and I get caught up in our routines.  Life can almost become somewhat predictable.  How wonderful it was to recently host my parents.  They helped us see realities with fresh eyes. They were aghast at how difficult life is here.  They were angered that the government of Congo does so little to help the beleaguered population.  They were awed by the glory and beauty of this land.  To see this place through their eyes was a marvel and a reminder.  They had stepped aside from their everyday routines in the Bay Area (CA) and come to a place few choose to venture.  They came with eyes determined to see and hearts determined to understand the blessings and burdens of this land.  God only knows what purposes He has for them because of this experience. 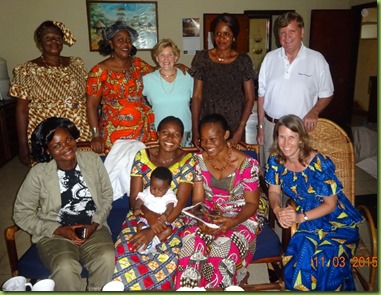 Members of the English Conversation Hour, Kristi, and Steve and Gloria Rice -
my parents were enthralled to see the creativity and intelligence of these women,
but saddened by the lack of opportunity for them here in Congo

Two years ago the World Council of Churches ratified a new affirmation on mission and evangelism called, “Together Towards Life:  Mission and Evangelism in Changing Landscapes” (TTL).  Apparently, one section of this affirmation, ‘Mission from the Margins’, has been the most popular, debated and contested.  It contends that people on the margins have agency - they can see what others miss; they are intimately aware of the forces which seek to rob them of life.  People like us, privileged by comparison, have much to learn from those living in marginal conditions (TTL, paragraph 38).

Personally, I believe that this concept of ‘Mission form the Margins’ is of profound importance for those of us involved in Christ’s mission in the world.  Mission has often been conducted from those of us in the center or privileged position to those on the margins.  Thus, mission has had and continues to have a paternalistic posture.  However, in Jesus, we find one who “relates to and embraces those who are most marginalized in society, in order to confront and transform all that denies life” (TTL, para 37).  He doesn’t come as one from above, but as one who is willing to stand alongside.  In fact, as Paul tells the Philippian church, Christ emptied himself, taking the form of a slave and being born in our likeness (Phil 2: 6 – 11).  Jesus was connected to the lives of marginal ones.  He stopped when he heard the cry of bind Bartimaeus.  He reached out and touched the unclean leper, meaning that he was now unclean by Jewish ritual and custom.  He allowed himself the shame of being fully cast aside by the religious establishment, being crucified like a common criminal outside the gate of Jerusalem. Jesus did not come as one from a place of privilege or power.  He came in meekness and poverty.  He gave agency to those who would decry the worldly and religious systems which had stymied them and forced them to the ground.  He came to pronounce the year of the Lord’s favor (Is 61), and he did so in solidarity with the marginalized whom he gave agency and voice to.

What a prophetic and powerful way to think about mission.  Too often we are too keen to rub shoulders with the powerful and the rich, claiming our good intentions of doing so for God’s mission.  Yet, God’s mission begins and ends with the “least of these.”  For enslaved Israel, it began with an estranged exile going about his shepherding business.  For the people of first century Palestine, it began in a hovel where a child was born amongst livestock.  If we are neglecting voices in places of destitution and injustice and only feeding those ones crumbs from our American Pie, surely our good news is not the news of Christ our Savior.  “Mission from the Margins” – there is much to learn just by listening and going to places where others choose not to venture.  Surely, we will  be changed in the process.  Just ask my parents!

** This blog post was inspired by the journal article “Mission as a Burning Bush Experience of Semper Reformanda ‘from the Margins’” by Peniel Jesudason Rufus Rajkumar, in the periodical Reformed World, Volume 64.3 December 2014.