“I was the symbol of justice in the court of the oppressor, the representative of the great ideals of freedom, fairness and democracy in a society that dishonored those virtues.  I realized then and there that I could carry on the fight even within the fortress of the enemy” (Mandela; 1995).

These words represent an epiphany of Nelson Mandela when he had gone “underground” as a member of the African National Congress (ANC) and was then apprehended by the police.  These words are written in relation to his first imprisonment which then extended for 27 years.  These words epitomize his long struggle against the tyrant of apartheid in South Africa.  Nelson Mandela is an icon of our times.  His life and legacy are celebrated in South Africa and across the world.  Few people have possessed his grit, his courage, his wisdom, and his desire to promote justice and fairness.  His stood resolute against the beast of apartheid and all its unjust, heinous laws.  Mandela’s life is worthy of our study and understanding.

Nelson Mandela grew up a happy and carefree child in the hills of Qunu in the Transkei of South Africa.  He was groomed, as his father had been before him, to serve as a counselor to the rulers of the Thembu tribe.  Like his father, he possessed a stubborn sense of fairness and a proud rebelliousness.  He was steeped in the traditions and rituals of his people, a proud people who had fought against white invaders in generations past.  Mandela writes that the White man had sought to destroy the “Abantu” (fellowship) of various tribes; the White man was hungry and greedy for land, and “took the land as you might seize another man’s horse (27).  Early in his life, Mandela learned lessons of leadership and democracy by observing the local chief (regent) and his court.  Meetings were not scheduled but called as necessary, where matters of significance were discussed and decided upon.  Mandela observed democracy in its purist form in this court, where everyone who wanted to speak did so.  Mandela would receive the best education given to a black South African at the time.  However, his informal education through the influence of famous Xhosa chiefs and poets would set the course of his life.  He learned that his primary identify was that of a proud Xhosa, and later he embraced his greater identity as an African.  Mandela would later go to law school and would open his own law practice in Johannesburg.  In 1947 he officially joined the ANC and became a leader in his region.  It was from this platform that Nelson Mandela because the figurehead of a national movement and the lightning rod of controversy concerning a re-envisioned South Africa based not on the Nationalist Party and its hegemonic, White South African elitist and discriminatory objectives, but rather a South Africa based upon the intrinsic value of all persons of all colors, creeds and political affiliations.  Mandela painted a picture of this new South Africa when he spoke unabated for four hours defending himself and the actions of his colleagues at the famous Rivonia trial.

Many people, including myself, question the use of violence by the ANC.  In fact, Nelson Mandela did not expect to receive the Nobel Peace Prize because the ANC had adopted such measures.  But he and his colleagues painstakingly made this decision because they felt that they were pressed to do so.  They had tried to lead an effort of resistance based on the principles of Gandhi and nonviolence.  Their efforts were met only with an iron fist.  For the first fifty years of the ANC’s existences, all ANC efforts and objectives were based on principles of nonviolence.  However, they felt they had to change their tact.  They felt behooved to do so because of the unfettered violence and ruthless subjugation of the apartheid regime against them and their people.  In responding to one of his detractors while in prison, Mandela would say that even Jesus raised the whip against the money changers in the temple.  Personally, I do not know whether violence is defensible.  However, in this context of South Africa, an armed struggle became an effective means to bring the Nationalist government to the bargaining table.

Nelson Mandela gave his life to his people, and to all South Africans.  It meant that he was stripped of his freedom to be a father and a husband, and it forced him to live the degradations of prison life for almost three decades.  Yet, over the course of his life, Mandela demonstrates a deep care for all people, including his oppressors.  His life changed the landscape of the world as we know it.  I commend to you his autobiography, Long Walk to Freedom.  In this book you will meet a man of profound conviction, outstanding courage, personal charm and good humor.  A movie based on his life hits the theatres Christmas Day.  Please go see it, and please pray for peace and reconciliation for all peoples. 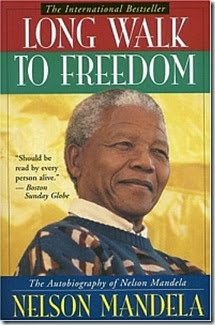