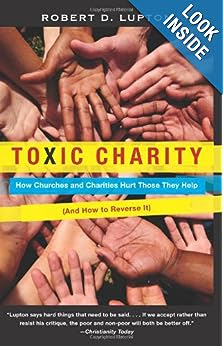 I just finished reading this thought provoking book by Robert Lupton. I must admit that sometimes I had to read it in small chunks – just one chapter at a time – because it felt like so much to think about. I have studied international development and missions, worked with several different organizations in different contexts, and experienced situations where I struggled with questions of dependency and long-term impact. Yet, I felt like in this book Lupton articulated in a fresh and poignant way the harmful long-term effects that we too often have with our charitable efforts. For example, the unintentional battering of parents’ dignity when their children receive presents from strangers rather than from them. Or a church that makes an annual mission trip which over time weakens their partner rather than empowering them. It felt a little jarring and hard-hitting at times, but definitely a message that could be the wake-up call that we need.

Lupton writes from forty years of experience in urban community development, and involvement with churches in that process. He tells poignant stories that include insightful perspectives from people who have received help in building houses, tutoring children, or cleaning up neighborhoods in poor communities. I want you to read the book, so I don’t want to give away too much. But these are common situations…we know that the world is in crisis in so many places, and people are suffering. We want to help, and doing a food drive sounds like a great way to meet one need. Or sending a team to Mexico to build houses. Most of us have participated in some effort like that, or in some way supported those who did. It is these common actions and strategies that Lupton challenges us to reconsider. “Wherever there was sustained one-way giving, unwholesome dynamics and pathologies festered under the cover of kind-heartedness.” (pg 35) The action itself is not wrong, of course, but it is good to be challenged to evaluate our strategies and priorities in the process of trying to help.

While his focus in this book is rightly on charitable efforts within America, Lupton does discuss charitable efforts outside the U.S. as well, and cites the book Dead Aid by Dambisa Moyo for statistics and examples. I have read Dead Aid, and recommend it as a book that also sheds light on efforts in international development. But in Dead Aid, Moyo bases her statistics and findings exclusively on government to government aid (e.g. the U.S. government giving a loan or grant to Congo). So – my one reservation in Toxic Charity is that sometimes he is using statistics from Dead Aid that might not be the proper fit for the context.

Lupton lays out some good principles to guide our efforts to help, including his Oath for Compassionate Service. One message stands out clearly in his book that we heartily endorse – relationship, or partnership is key. We (as westerners, or anyone trying to help someone else), need to make sure that we are not disempowering those we are trying to help, or imposing our own goals or strategies for how the problem should be resolved. This is hard. I am a person that loves to help, and likes to be efficient. Sometimes, I go overboard, in doing something “helpful” for Bob, and he has to remind me that he would have preferred to do it himself. Even more so in a cross-cultural or partnership situation do we need to exercise restraint and respect the decisions and priorities of our partner.

We encourage you to read this significant book – and you can join us to hear Robert Lupton speak and discuss more about healthy engagement in missions at the Big Tent World Missions conference in Louisville, August 1-3.

Sally and I have read the Kindle free sample of this book and agree that it looks very interesting. We will recommend it to our Sunday School Issues Class for our next topic. Thanks for this post.