At around 9:15am last Sunday morning, Pastor Kazadi and I hopped onto the back of a couple of motorcycle taxis (“motos”) and zipped off.  The feelings I felt on the back of this moto were a mixture of exhilaration and fear as we evaded potholes and pedestrians and overtook other motos and larger vehicles.  Our destination was the Congolese Presbyterian (CPC) parish in Tubuluku, a small village on the outskirts of Kananga.  A grand event and a festive throng awaited us and all the other worshippers and guests.

An ordination service is a significant event here in Congo.  Today the presbytery of Kananga would ordain the eighth woman pastor of the CPC.  Later that afternoon I would tell Kristi with hyperbolic fascination that “everyone that we have ever met in Kananga was at this event.”  It was a big deal. 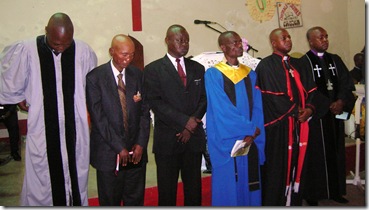 Ordination Committee of the Presbytery

As you can maybe imagine, Congolese culture tends to be very traditional and patriarchal.  Generally speaking, the role of women is to care for children, to cook and clean, to fetch water (an arduous process), and to manage the affairs of the home.  Roles between men and women are fairly regimented and clear.  An understandable and realistic perception is that women are undervalued or devalued in public life.  The reality however, in our experience, is that the women form the backbone of society here in Congo.

Mamu Tshiakafua Madeleine is the mother of six children.  Her husband, Pastor Muntu Jean Baptiste , serves the parish in Tubuluku.  In 2005 she finished her “license” in theology in Kinshasa, which is equivalent to a Master of Divinity degree.  She has been serving the presbytery as chaplain and will continue in this role.  As chaplain, she visits the sick and those in prison.  She also mediates disputes and provides pastoral care to other pastors.  She and her husband impress me as a dynamic duo.  Some church leaders whom I ate with after the service suggested that, perhaps at a later date, Pastor Tshiakafua could serve as an associate pastor alongside her husband at the church in Tubuluku.  This development would be encouraging in that currently there are no women pastors serving officially in a pastoral role in a local parish within the entire CPC community, which comprises at least three million members. 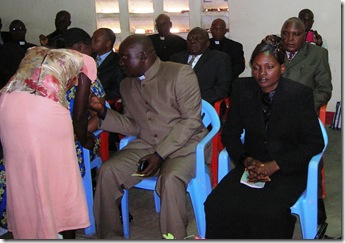 The pastor who preached that day chose his text from Luke 1: 46 – 55, popularly known as “Mary’s Song.”  This passage of scripture chronicles Mary’s song of praise as she  glorifies God for seeing her lowly estate and choosing her to fulfill his purposes and plans.  The pastor focused squarely upon the second half of verse forty eight where Mary marvels, “From now on all generations will call me blessed.”  The pastor lifted up the value and role of women throughout scripture, and built the foundation of his message upon these timeless words from Mary.  As a congregation, we repeated these words several times together in a rhythmic cadence that became electrifying.  It was almost as if we were prophetically praying these words into the life of Mamu Tshiakafua, who would soon be ordained as a teaching elder (pastor) in the CPC.  The second half of the service included:  a summary of Mamu Tshiakafua’s life and ministry, the profession of ordination vows, a time of anointing and prayer, a welcome into the ordained pastoral ministry by the Ordination Committee, the reception of gifts, and a final benediction given to all by Mamu Tshiakafua to close the service. 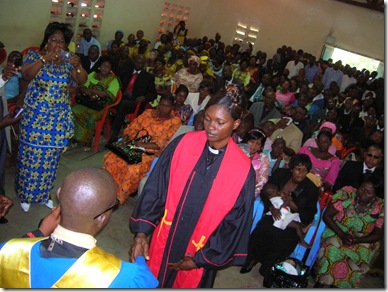 A welcome (with handshake) into ordained ministry 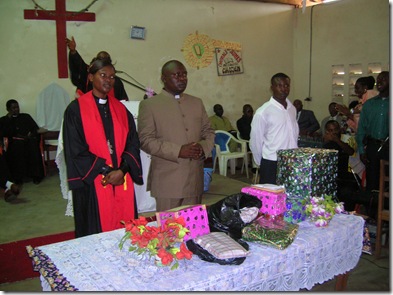 Writing this blog I recognize that the ordination of women is a contested issue in different Christian circles.  Without being polemical or making an exegetical defense of women in ministry, let me simply suggest that Mary’s Song serves as a prophetic witness to the reality of God’s favor towards the lowly and overlooked populations of the world.  Moreover, God can use anyone as his instrument, even as He chose to use a teenage girl named Mary in the first century.  Today, two thousand years later, we can affirm those prophetic words uttered in astonishment by young Mary - ‘all generations will call me blessed’.  No one can discount Mary’s singularly awe-inspiring role in bringing the Christ child into the world, raising him under her watchful and discerning eye, and later serving him as her Lord.  Mamu Tshiakafua…Pastor Tshiakafua, may future generations also called you “blessed.” 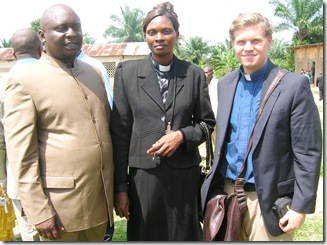