Last week we attended a prayer meeting here, held specifically for those affected by the recent tornadoes and flooding in the south-east of the U.S. The Presbytery of Nganza, located near us in Kananga, is one of the sister-presbyteries to the Presbytery of Sheppards and Lapsley in Alabama. When people in Kananga heard about the devastation caused by the tornadoes, they grieved for their friends and sister churches in Alabama. They called a day of prayer, and designated 2 locations in the presbytery for congregations to gather.

We gathered at Ditalala parish at about 10 o’clock on Tuesday morning. It happened to be a holiday here, so kids were out of school. Most of the adults, especially women, earn their income from the informal sector of market-selling or farming, so it was a definite sacrifice for them to give up their work for the day. At least 8 choirs, including adults, youth, and children, added to the worship with their songs.

Pastor Charlotte Keba facilitated the service, and most of the pastors in the Presbytery were present. Pastor Tshiyoyo, the stated clerk of the Presbytery, described the effect of tornadoes and the flooding. Bob also shared some news and prayer requests that we had heard from church-members in Alabama. When it was announced that 300 people had been killed just in the state of Alabama in this disaster, there were audible gasps and groans. The congregation was empathetic when they heard about buildings being destroyed, families being out of work and not having a place to live; people in Congo understand those devastating ‘curveballs’ that happen too often in life. 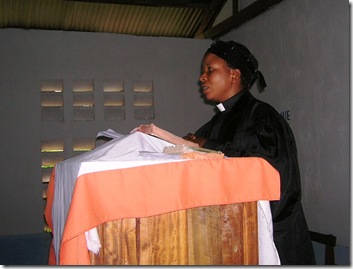 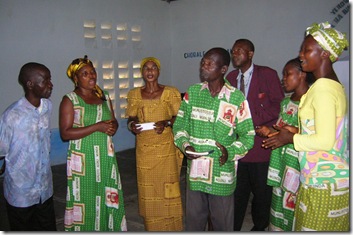 This choir sings “God is our fortress and strength”

Pastor Sylvain Kazadi, the moderator of Nganza Presbytery, preached a message from Romans 8:31-39. Pastor Kazadi emphasized that there is nothing that can separate us from the love of Christ. Suffering is real, but we can overcome all things because God loved us. Pastor Kazadi then led the congregation in several specific times of prayer. We prayed for healing for the wounded, shelter and provision for those in need, and the rebuilding of churches. We asked God to give wisdom in the use of resources to assist, and that those with the ability to help would be led by God. We prayed also that God’s grace and forgiveness would be known to all, and those who had turned away from God would be drawn back to Him. The congregation prayed that their Christian brothers and sisters affected by this disaster would stay true to their faith in the midst of suffering. 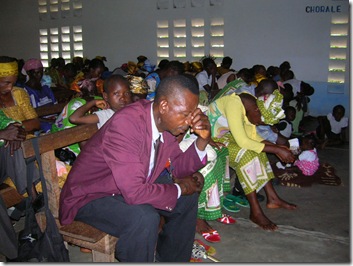 Everyone intercedes for those affected by these disasters. 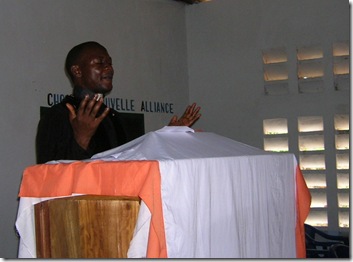 Towards the end of the meeting, they had a ‘roll-call’ of all the parishes in that section of the Presbytery. For every parish called, there were at least a few people present. It was especially impressive to see the large turnout from Tshikaji, perhaps 10 kilometers from where we gathered. They counted 211 people in attendance – many had walked a few hours to get there.

Partnership – it is a lofty-sounding word, perhaps, and implies people working together for a common goal. The Presbytery of Sheppards and Lapsley in Alabama has invested a lot of people and resources in Congo, and specifically in this Presbytery of Nganza. This prayer meeting was a living example for us of the ways that, despite the limited material resources in Congo, this partnership is not a one-way street. The Christians of Kananga took seriously the call to intercede for their brothers and sisters in trouble. 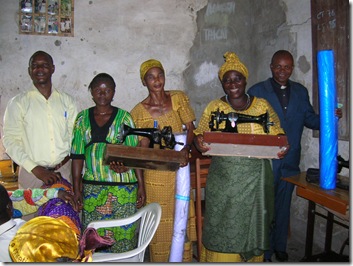 (from left) Pastor Kazadi, Mamu Fifi, Mamu Kamuanya Niklette,
Mamu Biakupangana Bijou, and Pastor Tshiyoyo;
Mamu Fifi is the facilitator of the sewing program,
with assistance from the other 2 women.

After the prayer meeting, Pastor Kazadi hosted all of the leaders and pastors of the presbytery for a meal in his home (can you imagine serving lunch to 50 hungry people in your house??). They ‘inaugurated’ new sewing machines and equipment that had recently been donated by the Presbytery of Sheppards and Lapsley to restart and expand a program to teach young women to sew. It seemed to be a fitting cap to the day, and brought the impact of this Partnership full circle. Praise God for the ways that he gifts us to be a blessing to others!

Thanks for your post reminding us that the Spirit flows both ways as we work together to further the Kingdom.

Thank you, friends in Congo, for praying for those in Alabama affected by the tornadoes. Your concern and prayers mean a lot.

We feel a closeness to you all. May God bless you and all you do richly.

Thank you, Bob and Kristi, for keeping us informed. We thank God for you.

In His love,
Anna McIlwain

Thank you for praying for all of us here in Alabama. Our church sustained damage on April 27th as the tornado tore through Tuscaloosa. We have temporarily lost the use of our sanctuary but were blessed with a place to continue our worship services (in the original sanctuary that had been remodeled into our fellowship hall. I will be sharing this with our congregation, Covenant Presbyterian Church, Tuscaloosa, AL.

Thank you for your love and
concern. Thank you for the
sacrifice of work time to participate in your prayer and
worship service for Alabama. It
was a great blessing to me to read
about it and see the pictures. We
are truly connected through Christ.