While visiting the village of Bulape, we got to spend some time with a dynamic young pastor named Jackie. She is the chaplain at the Bulape hospital, and has a thriving ministry among the patients. Her ‘congregation’ at the chapel is mostly children, drawn to her because she makes her sermons understandable to them. Her heart of compassion and desire to make God’s truth known really inspired us, and we thought you might enjoy hearing a bit of her story. Jackie, at her desk at the hospital

Jackie was invited to come to seminary in Kananga on a scholarship for women students in 2004. She and her husband sensed God’s call, so she packed up 2 of her 3 children and moved to Kananga, while her husband remained in Bulape. During her first year she gave birth to her 4th child, and 5 days after the birth was back in class. During her first year, 10 female students began studying theology. After their first year, the scholarship ended, and only 3 of the students remained. She pushed on, and her husband and family struggled to support her study. In her second year, her 2nd child and only son got a bad case of malaria and died. In her distress she decided to quit school, but her husband exhorted her to persevere and continue. She graduated in 2009 with a master’s degree in Theology, and returned to her home in Bulape. As we heard her story, we were struck by the sense that she has a true, “tangible'” commitment to her Lord, and has endured plenty of pain and shame in her journey! On a redemptive note, after Jackie returned from university, she had 2 more children – both sons.

In rural Congo, boys are still favored to receive education over girls. Families prefer to save their resources to educate sons, and often the dowry money paid for a bride is used by the family to support the education of their sons. (I should mention that one thing the CPC has always advocated for in its 100+ year history is the education of girls, and Jackie is one evidence of that effort). Culturally, men are also favored for jobs and leadership roles in the community. Women very rarely get a ‘voice’ in decisions, and their lack of education further squelches their opportunities. When Jackie returned to her village with her degree, many were not sure how to respond to her. As a pastoral candidate, she was given the position of assistant pastor in a local parish. After 1 month, the male head pastor left on extended leave, entrusting the ministry of the parish to her. In her first week of solo ministry, attendance at the church plunged from 400 to 90. She cried out to God, asking why God had called her to ministry and brought her this far only to let her be humiliated and the church scattered. She prepared her sermon for the following week, but on Saturday night she had a dream. She heard a voice tell her a specific text and subject to preach on, and describe for her the thoughts and questions that were plaguing many of the congregation. After the service the next day, people went home shaking their heads - “She taught exactly what I was wondering about!” Attendance grew, and after a month attendance was back at 400. She served as pastor in that parish for 6 months, until she was called to be the chaplain at the hospital. She was then ordained in early 2010, and the whole village came to support her at her ordination. 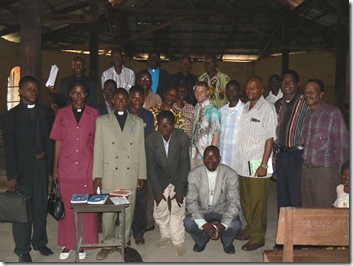 Over the past year, she has preached on the radio a few times from a neighboring town. She said that she is the only woman and only protestant who has preached on this government station. Most people who want to preach on the radio pay a fee, but the station director is so enthralled to host a woman pastor that he does not charge her. She said that after each time she preaches, she gets phone calls and letters from rural parishes with invitations to come preach. People say that although they have heard her voice, they want to see her in person – they have never seen a woman pastor before. She continues to teach religion and literature in the local high school, and said that she is encouraged by several families in the community who have supported sending their daughters for higher education. She has also motivated 2 women to study theology at the university level – the first step to becoming a pastor.

In her role as chaplain, Jackie seeks ways to minister holistically to the patients. Chapel is held twice per week at the hospital, and she makes rounds to pray with patients personally. She bought a few chickens, and gave them to a couple of widows to care for. Periodically, she collects the eggs and uses them to feed malnourished children at the hospital. Sometimes she picks a day and makes beans and rice to serve to all the patients at the hospital. Occasionally she buys candy to pass out to the scores of children in her congregation. When patients do not have food to eat or clothes to wear, she is often their primary source of comfort and help.

We thoroughly enjoyed our conversations with Jackie – she is a refreshing and hopeful voice in Kasai. Her husband, Emmanuel, is one of the few men in Congo who would be willing to sacrifice for his wife to be more educated than himself. Her life holds hope for many of the girls in her rural area, that they too can be used of God and help instruct others. We look forward to seeing the fruit in years to come!