A tall Congolese man named Jim, who says he was not my previous owner, brought me to 16 Lac Fwa street in Kananga on September 9th, 2010, the day after my new owners’ 3rd year wedding anniversary.  Jim carried the cage and sat me down on the ground, in my wrought iron cage, as he gave a description of me to the potential new owner.  “This parrot costs $50.  The former owner needs the cage back.  This bird is 10 years old, which is young.  He could live to be 50.  He has been treated well.  He doesn’t bite…he just kinda gnaws on your fingers with his beak.  He sings, speaks some Tshiluba and some French.  He hasn’t been out of his cage much, but he can come out.  The owner is selling him because he needs the money.  His wings have grown back, but he doesn’t know how to fly.  He likes to nibble on wire.”

“Does he have a name?” inquired the potential new owner.

“Yes, his name is Jackoo, which means ‘parrot’ in Lingala,” quipped back Jim.

“Okay,” replied the potential new owner.  “We will keep him for a few days and let you know if we want to keep him.”

This is the way my new life started with my new owners, Bob and Kristi Rice.  What Jim said about me is largely true.  He didn’t mention, however, that to buy me in the United States would fetch a very mean price, $1500.  I am quite proud of that fact.  Bob and Kristi got quite the bargain for me here in my homeland of Congo.  Yes, it is true, I speak some Tshiluba, “Wetu au.”  I also know some French, “Bonjour.”  My favorite thing to say by far however is my name - “Jackoo, Jackoo Jackooouuuuoooo!”  I like to sing and I like to nibble on everything.  Bob and Kristi are amused that I can also do an impeccable imitation of a goat, a sheep, a chicken, a dog, and a cat.  I have heard them say that they got the bargain deal with me! (six animals for the price of one!).  And yes, I don’t bite...well, not usually.  There were two times when I bit Kristi’s fingers.  They were cleaning my cage and trying to put me back in.  Heh, give me a break!?  I felt a bit nervous shultzing around in the big wide world of tile floors!  What is a guy to do but feel a little defensive? 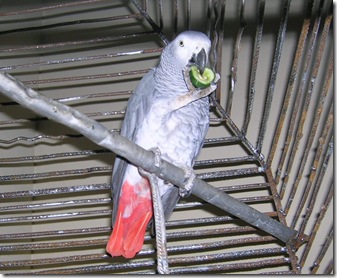 I overheard a missionary friend of Bob and Kristi say that parrots are the second most intelligent non-human animal behind chimpanzees.  Hah!  I resent that statement.  I will beat a chimp at “Name that Tune” any day of the week and twice on Sundays.  Bob recently read that parrots have the intelligence of a human three year old and the emotional intelligence of a two year old. I will concede these facts, though I am not happy about them (“animal pros” do seem to know what they are talking about).  I am hoping, however, that we parrots can find a way to take over the world!  We can put humans in cages and laugh at the funny things they say and do.  That will be the day.  Actually, Bob and Kristi are good owners overall.  I cannot complain too much.  They went to the metal workers in town and had made them make two nice new homes for me.  My indoor home is a very large silver “etage,” second story suite.  It has plenty of climbing rails and a nice wide swing where I like to perch.  They have added a rope which I sometimes play with and nibble on. 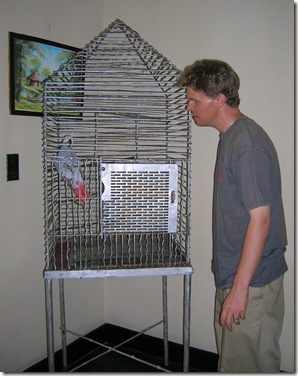 I probably could use a few more toys, but they will figure that out with time.  Actually, they have given me a small, red, empty tomato can which I LOVE to play with.  I use it to clank and make noise (dinner time yet? come on people…), scratch my back, and push it along and chase it around in my cage.  I also do some incredible acrobatics with it (someday we will post a UTube video so you can see for yourself!).  Hey Ringling Bros, need a new parrot?  Kristi has also added a blue cup where I can always find water.  My throat gets a little dry sometimes after all my chirping, singing, talking, animal imitations, and gregarious laughter.  I can makes lots of noise and sometimes I think it may be disruptive.  Although, I do confess that I become very quiet when new visitors come to Bob and Kristi’s home.  In that sense, some might think I am shy.  Bologna, I am not shy.  I am just scoping out these newbies.  Once I feel comfortable, I like to show off my repertoire of heavenly sounds and noises.  Okay, okay, Bob and Kristi may not always refer to my sounds and noises as “heavenly.” 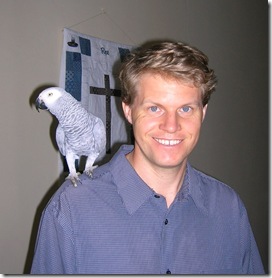 That’s me on Bob’s shoulder! 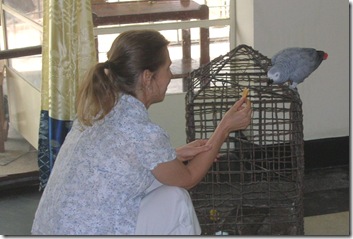 Kristi tempts me with a cracker  (she is one of the few to outwit me!!)

Bob and Kristi also had a second home welded together for me, which is black and somewhat resembles my old home, accept that it is easier for them to get me in and out of the door.  They customized it so that it can hang it from their balcony above Lac Fwa street.  Outside on the balcony is where all the action is!  Lac Fwa has lots of foot traffic and I love to interact with passers-by.  The children seem to like me the most.  They often greet me in either Tshiluba, French or international jibberish.  I always respond!  Bob seems to think that I am like that poor kindergarten child who has trouble fitting in.  Thus, I make all kinds of sounds and noises to try to gain attention and be popular.  Well, so far it seems to be working.  I love “playing the field” on the street – whistling back and forth with others, making large-booming-cackling laughing sounds that remind Bob of a large Italian woman (matriarch) as she jovially squashes her nieces and nephews.  I think that perhaps I can becoming something of ‘an item’ on Lac Fwa – an amusement to some, a friend to children, and hopefully not too much of a nuisance to others. 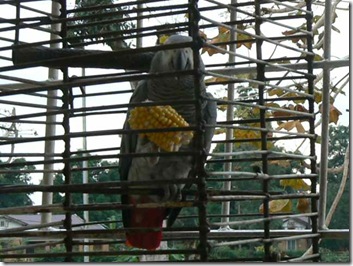 Well, I have exhausted your ear for now.  Bob and Kristi like to blog.  This is my first entry.  I will write again.  I promise!

Most articulate parrot! God will surely speak through him to support you when you are having a rough day. Our prayers are with you and Augustin Mukendi who visited with us last fall.