On Thursday morning, March 4th, Kristi and I woke up at 5am for our flight from the capital city of Kinshasa to Kananga, the city where we will live for the next three years.  Kristi made the comment early that morning that this trip felt “bigger” than our moving to Congo.  Indeed, this trip did seem ‘bigger’ in the sense that we would soon be arriving in a place where we had never been before, and meeting people whom we will be working closely with for the foreseeable future.

The drive to the airport through Kinshasa was harrowing!  Our driver weaved in and out from other vehicles, stopping quickly and then accelerating.  We were equipped only with the seatbelts of faith.  The airport was bustling with activity and our “protocol” person, Mukila, helped us navigate through the officials to our waiting lounge.  We flew with Rev. Kazadi whom we met in Kinshasa.  Kazadi is a Presbyterian pastor who pastors a church in Kananga and works with the Evangelism Department of the denomination.  He works in the area of development.  We had fun together on the plane!

We first stopped in Mbuji-Mayi, the capital city of East Kasai.  We then turned and flew to Kananga, the capital of West Kasai which was our destination.  Because the distance between Mbuji-Mayi and Kananga is relatively short, the plane flew low.  Thus, we were able to admire the undulating hills and valleys of the landscape.  Small (very small) villages were connected with narrow dirt roads.  After 25 minutes, we landed in Kananga.  Outside of the plane was a large constituency of political supporters of the ruling political party here in Congo.  They were all wearing colorful yellow bows (like scarfs) and were singing, chanting and dancing.  They were receiving a top government official; this is standard protocol.  Elections are next year, so even now, politicians and political parties are gearing up.

As we walked across the tarmac we were greeted by Dr. Mulumba and other leaders of the church.  Dr. Mulumba is the General Secretary of the Presbyterian Community of Congo.  He led us to an air-conditioned waiting room while others went to collect our bags.  Also there to greet us upon our arrival was Rev. Mboyamba, the Director of the Evangelism Department, with whom I (Bob) will be working closely.  After enjoying some casual exchanges and pleasantries in the waiting room, we got into a Land Cruiser with Dr. Mulumba and another leader in the church named Mukulu Ilunga and headed for town.  Lunch was prepared for us at the Protestant Center.  Dr. Mulumba introduced us to the respective leaders present, and then Rev. Bope, the Legal Representative of the Church in West Kasai, gave a prayer of thanksgiving for our arrival.  We enjoyed a wonderful meal of bidia, chicken, beef, makamba (cassava leaves) and fried plantains.  Bidia is a mixture of corn and kasava flour and water.  It is a staple here in Kasai.  One scoops it with one’s hands and uses it almost as a spoon to eat other food items.

We are here!  It is exciting.  Tusakadile Nzambi! (Praise God). 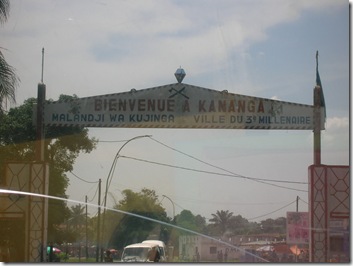 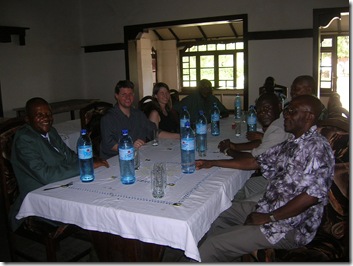 We're really glad you arrived safely. Please give greetings to all our friends there.
-Jonathan and Janet

A fine blog.. I keeping a glossary!
Eat well...sleep well.