We made it! Last Friday, we finished our frantic packing and sorting, and left my parents to pick up the pieces from the ‘storm’. It is so much easier to throw or give things away when you know it will not be nearly as important 3 years from now. 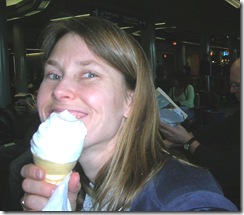 We drove up to Chicago, and only had to do some minor rearranging to make the 50 lb weight limit on our 4 bags.  We went to the gate to settle in, and then realized how strange it was to finally have TIME on our hands! We could read a magazine, or a book, or look at pictures…for fun! We enjoyed a McDonalds ice cream cone as a last American treat. :) 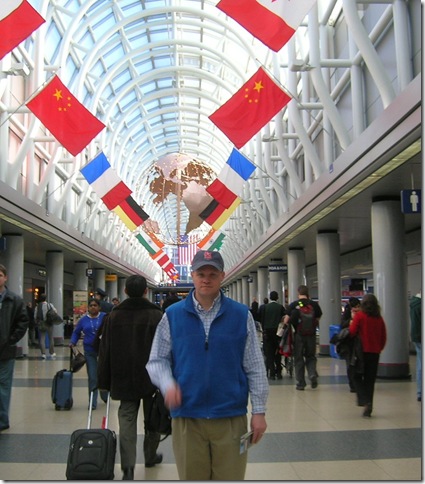 Our flight to Brussels arrived about 1 1/2 hours later than scheduled, so they announced when we landed “If you are going to Kinshasa, HURRY to gate T72, or you will be stuck here for a few days!”. It was our first time in the Brussels airport, and it was a long hike between gates, but fortunately our connecting flight was delayed also, and we made it with plenty of time. On the flight from Brussels to Kinshasa, we made a brief stop in Duala, Camaroon. We noticed that the mood in the airplane seemed to be a little more ‘relaxed’ when we departed Duala, since there were passengers still standing when we were taxiing on the runway.

We were very grateful that we had been forewarned by some friends that the Kinshasa airport is ‘bedlam’. We reminded ourselves to be patient and calm, and to make sure that we got the right stamps in our passports. A security person at the airport had a sign with our names on it, and led us to the person who was picking us up (for a tip, of course!). I stood by the side with our bags while Bob dove into the fray and retrieved the pieces coming off the belt. There seemed to be a lot of young men around the luggage belt, who we did not recognize from the plane. We learned later that they were probably ‘baggagiers’ (people hired to retrieve or carry luggage) or protocol agents. Bob encountered a little animosity when we was retrieving one bag…perhaps because we had not hired someone to do it for us!

Our protocol person was helpful, even dragging some of the heaviest bags out to the car. Our first view of Kinshasa was at about 9pm on Saturday night. The city was still busy with activity, as you can imagine! The vehicle did not seem to us to have any front headlights, but the driver seemed to have found some good adaptations. Yellow and Blue bus-taxis were everywhere—usually with a back door propped open with someone standing in the door recruiting more passengers. We made it to MPH (Methodist Presbyterian Hostel)—our home for the next couple of weeks until we go to Kananga. Whew! We made it! (at least into Congo!)

When I saw you had commented on my blog, I was hopeful that meant you had had internet access for a few minutes long enough to write something on your blog! What a fun thing to wake up and see TWO updates on your blog :-)

Thought of you when we had no running water, no heat, and at some points, no electricity Sunday. Fitting, since we were doing Senegal stuff all week... Ha ha :-) (Thought obviously that was NOT an intentional way to do church for that many people! LOL!)